Leaks are the most common sign of water pump failure, but what type of seepage are you seeing and what does it mean?

A coolant leak coming from the weep hole is a sign of water pump bearing or seal failure. This weep hole often resides between seals that separate the oil side from the coolant side. A small amount of “dry” seepage around the hole can be considered normal, but it’s only a matter of time before a seal becomes defective and the seep turns into a drip.

A coolant leak into the front cover area, connected to the oil sump, means the outer O-ring has failed. This could mimic a head gasket leak. 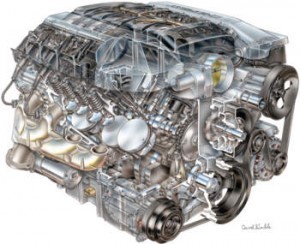 Adding cold coolant to an overheated engine can cause thermal shock and create a seal leak even in a new water pump. Starting an engine during a water pump replacement before adding coolant could have the same effect. Look for a crack across either the seal face or the mating ring as evidence.

Allow an overheated engine to sit and cool before adding coolant. Then, restart the engine and allow it to run while slowly adding the remainder.

The damaging power of rust

Abrasive particles accelerate water pump seal wear. For example, systems that are not properly pressurized allow air to enter and foster the build up of rust. Or, if water with a high mineral content is added to the system and is heated, it will begin to form deposits that will accumulate and cause passage restrictions. Both of these are harmful to seals.

Although rust is difficult to remove, it should be flushed from the system as thoroughly as possible before the old water pump is removed.

Pay attention to the O-rings

When replacing the pump, O-rings need to be lubricated with either oil or coolant. Do not use silicone or other sealants that can block the weep hole.

Cavitation is the formation of vapor cavities in a liquid as a result of forces acting upon the liquid, like rapid changes of pressure. Cavities form when pressure is relatively low, and then when subjected to higher pressure, the voids implode and can generate an intense shockwave. What’s this mean for a water pump?

Tying it in with the timing belt 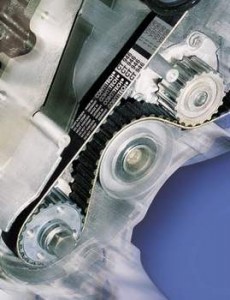 Water pumps serve as an idler pulley on many engines equipped with timing belts and, due to accessibility issues on many transverse engines and the labor operations involved in replacing the timing belt (especially on imports), it’s cost-effective to invest in a new water pump as well, especially if the pump is near the 100,000- to 150,000-mile recommended replacement mark.

Water pumps can sometimes support a mechanical fan. If the fan assembly falters in some way, like from a bent fan blade or a severely cracked assembly, bearings can be affected. For evidence, look for casting breakage around the bearing support as this is typically caused by excessive vibration or an imbalance caused by a badly worn fan or clutch. To remedy, inspect the pulley, belt alignment and fan/fan clutch assembly, replacing any bent or worn components.

Blue discoloration of the water pump shaft would indicate excessive heat buildup for some period, eventually ending in breakage of the shaft. This heat buildup can be caused by the tremendous centrifugal forces created by imbalance, which overloads the bearing and generates a ton of heat. A clean break indicates an “instantaneous” fracture caused by sudden overload or imbalance at the bearing.

To remedy, check the pulleys for proper alignment, straightness and fatigue. Inspect fan/fan clutch assembly for a bent or damaged fan, a worn spacer, or a worn or damaged fan clutch. 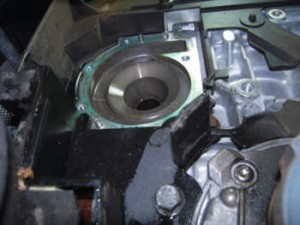 Noisy shaft bearings are the second-most common reason for water pump failure. Most shaft bearings fail due to normal wear in the bearing or due to the normal oxidation of lubricant on the bearing surfaces. In rare cases, bearing failure can be hastened by over-tightening conventional accessory drive belts.

Since the impeller and shaft are a press-fit assembly, slippage occurs most frequently on remanufactured water pumps. In any case, ­slippage can be intermittent in nature and can depend greatly upon the temperature and speed of the engine.

Some replacement impellers can be manufactured from inferior metals that are susceptible to rust corrosion. In most of these cases, impeller blades begin to break away from the impeller due to a rust-through condition, which results in decreasing pumping capacity and an increasing presence of rust contamination in the cooling system. 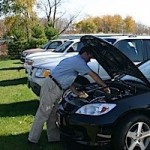 Engine oil and coolant leaks should not be ignored. Topping off the levels is often more costly in the long run than repairing the leaking gasket or component. Advising a customer about the potential damage that can occur if they decline a leak repair is not a scare tactic, it is important that they know…