Given the current range of extended maintenance intervals, it’s safe to say that your shop might see Grandma’s 2011 Volkswagen Jetta only when its oil life monitor indicates the need for an oil change. The overriding issue at this point is that Grandma might have driven her VW only to church on Sunday for several years without once having the hood opened.

Cooling system maintenance begins with an inspection of the transparent plastic coolant reservoir located in the engine compartment (see Photo 1). After 10,000 miles of driving, the typical reservoir might need a cup or two of make-up coolant to compensate for normal evaporation loss. But if the coolant level is well below the “add” mark, the vehicle is losing coolant through an external leak or through an internal cylinder head gasket or intake manifold gasket leak.

It’s always a good idea to check for leaks by pressure testing a cooling system while the engine is cold (see Photo 2). If the coolant appears to be dirty or contaminated with rust, the cooling system should be flushed and the coolant should be replaced. Always test the coolant freezing point, and don’t forget to consult service information and TSBs regarding coolant change intervals and cooling system performance issues.


An overflow reservoir is non-pressurized, which indicates that the reservoir “breathes” through a radiator pressure cap mounted directly on the radiator. As the coolant volume expands and contracts with changes in engine temperature, coolant flows around the cap’s pressure relief valve and through its coolant inlet valve.

For this reason, a clogged coolant return hose or radiator cap can cause driveability and overheating complaints. For example, a mysterious no-code stalling complaint was misdiagnosed by one shop as a bad crankshaft position sensor. Although the coolant reservoir appeared full, a leaking water pump had actually drained the engine of its coolant. The stalling complaint occurred when the ECT sensor no longer contacted the engine coolant. Since the ECM could no longer sense engine temperature, it maintained a rich air/fuel mixture that would stall the engine when it was in an overheated condition.


After cleaning the reservoir, a gummy, gel-like accumulation was found to be clogging the reservoir’s return port (see Photo 3). The gel formation shown in the below photo was caused by either mixing different coolants or by non-compatible additives, which leads me to a word or two about mixing coolants.

While researching Volkswagen OEM service information, I found that VW recommends a mixture of distilled water and at least 40% of the specified VW antifreeze for its cooling systems. According to more detailed aftermarket service information, VW coolant on some of the 1998 to 2005 models is non-silicon-based. Mixing a non-silicon-based coolant with a silicon-based coolant produces gelling and subsequent clogging of internal coolant passages, all of which explains driveability problems caused by clogged coolant reservoir return lines.

Given the comprehensive nature of today’s on-board diagnostics, I like to connect an enhanced or professional-level scan tool to evaluate the condition of the cooling system electronics. Before we begin, let’s look at how OBD II DTCs are sorted and stored in the vehicle’s diagnostic memory.

Diagnostic trouble codes can provide a history of cooling system performance. The very common P0128 DTC that indicates insufficient coolant temperature might be present in either the active, pending or history status. Looking at the P0128 enabling criteria from an aftermarket source, the enabling criteria for a P0128 on a 2010 Hyundai Accent with the 1.6L DOHC engine include:

The Hyundai’s P0128 is a two-trip DTC, indicating that the above enabling criteria must be met on two separate occasions before the MIL will illuminate, which is why the first P0128 failure might be found under “pending codes.”

While Hyundai’s P0128 DTC indicates that the primary failure might be a stuck-open thermostat, remember that P0128 might set if the coolant level falls below the engine coolant temperature (ECT) sensor. If the coolant level has since been topped out, the P0128 might no longer be active, and therefore, might be found under history DTCs. While the scan tool is connected, it’s easy to verify both ambient air and coolant temperature sensor accuracy by physically measuring temperatures with an infrared temperature gun. If the vehicle has been cold-soaked overnight, remember that ambient and coolant temperatures should fall within a few degrees of each other on scan tool data.

The symptoms of poor water pump performance are coolant loss, noisy bearings or overheating complaints. While most water pumps are belt driven, remember that computer-controlled electric water pumps are now used on some import nameplates.

Whichever the case, a water pump can fail due to bearing noise, seal failure or impeller failure. If a coolant circulation problem is suspected, water pump pressure can usually be measured by splicing a pressure gauge into the heater hose outlet. Don’t forget to plug the loose hose. While results vary according to application, the pump should produce 15-20 psi at the heater hose outlet at about 2,500 rpm.


Serpentine belts using EPDM rubber don’t show the cracking and weathering marks experienced by conventional belts. Instead of looking for cracks, it’s better to use a wear gauge to measure wear in the belt grooves (see Photo 4). EPDM coolant hoses similarly show few traces of weathering or wear. A good rule of thumb for coolant hoses is to replace, rather than reinstall, any modern cooling system hose after an engine repair or radiator replacement.

Customer interviews are important, especially when diagnosing radiator issues. Typical symptoms of poor radiator performance are overheating complaints while climbing long hills or idling in heavy traffic on hot days. Since the radiator’s job is to dissipate heat from the engine to the atmosphere, air must be able to freely pass through the radiator core.

While paneling must often be removed to inspect both the air conditioner condenser and radiator core for external clogging due to road debris, a careful cleaning of the external radiator core with low-pressure water and compressed air is good preventive maintenance. If the coolant is rusty or gelled, it is a sign that the radiator core might be clogged internally. 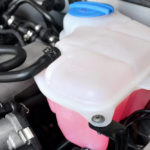 Checking Your AC and Coolant Systems

Despite the late season snow, spring is here and the temperatures will soon rise. Now is the time to make certain your vehicle’s A/C, heating, and coolant systems are in top-shape and free of any defects.