Radiator Construction
Most early vertical-flow radiators were made of an upper “header” tank soldered to a brass header plate holding the radiator core tubes in place. The lower plate and outlet tank was of similar construction. Unfortunately, vertical-flow brass radiators were heavy, expensive and environmentally challenging due to the liberal use of lead-based solder.

During the 1960s, most auto manufacturers adopted the horizontal-flow radiator design that is used to this day. Most horizontal-core radiators crimp an aluminum core tube assembly onto plastic header tanks, which are sealed to the core with rubber gaskets. In conventional cooling systems, the inlet connection is located at the radiator top while the outlet is located at the diagonally opposite corner but some high-performance sports cars flow from bottom to top. The inlet connection will generally be smaller than the outlet connection.

When To Replace
Given enough time and mileage, rust, scale and debris will eventually clog a radiator’s core tubes. A lifetime of road vibration, thermal stress and pressure cycling may also cause the core tubes to crack due to metal fatigue. Engine boil-overs can also lift sludge from the bottom of the engine’s water jackets, which will rapidly clog an older radiator already full of rust and scale.

Consequently, any vehicle with more than 100,000 miles on the radiator is a perfect candidate for a radiator inspection and evaluation. If the coolant is excessively rusty or the radiator core is excessively damaged from road debris, it’s time to consider replacing with a new, OE-fit radiator. 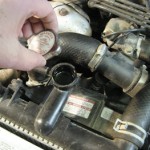 Assuming normal maintenance has been performed, radiator service should take place after most of them fail, which is around 100,000 miles of service.