An automotive cooling system’s basic function is to transfer engine heat into the atmosphere. The heat of combustion in a gasoline engine can reach approximately 2,000 degrees F at full throttle. Of course, the engine’s cylinders are exposed to these combustion temperatures for only a few thousandths of a second per combustion cycle, otherwise the engine’s aluminum pistons would melt. 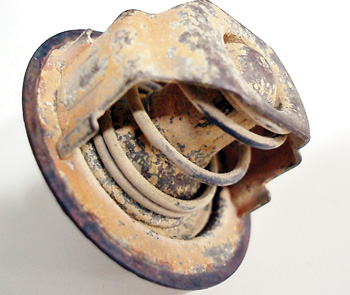 The engine’s cylinders are immersed in a coolant mixture that is typically circulated through the engine and radiator by an engine-driven water pump to remove the heat of combustion. Temperature is usually controlled by a mechanical thermostat that relies on the expansion of a wax pellet to accommodate coolant circulation by forcing the thermostatic valve open as the engine warms up coolant. A coolant reservoir is commonly used with modern engines to accommodate normal expansion of the coolant as the engine reaches its thermostatically-controlled operating temperature (~180-194 degrees F). While heavy-duty trucks continue to rely on engine-driven mechanical fans to draw cool air through the radiator, most modern cars and light trucks now rely on electrically-driven fans to accomplish the same task.

Cooling System Failure Patterns
Most cooling system failures follow several basic patterns. For example, a slipping water pump impeller or stuck-closed thermostat will stop coolant circulation, which results in a catastrophic overheating condition. In contrast, a clogged radiator most often causes a gradual overheating condition at highway speeds or under heavy engine loads. Keep in mind that the same result can be caused by a radiator that’s clogged internally, which restricts coolant flow, or it can be clogged externally, which restricts air flow around the radiator core tubes. Air flow restriction is quite common in agricultural and other areas experiencing high levels of airborne dust and plant debris.

Overheating also might be caused by leaking cylinder head gaskets which, on a cold engine, can force coolant from the overflow mounted on the coolant reservoir tank. Although belt slippage is rare on engines equipped with self-adjusting serpentine drive belts, it is common on engines equipped with conventional V-belts. In most cases, a slipping drive belt will be accompanied by a high-pitched squealing noise as the engine accelerates. Last, a slipping fan clutch or inoperative electrically-driven cooling fan system will generally cause the engine to overheat at idle or at low vehicle speeds. 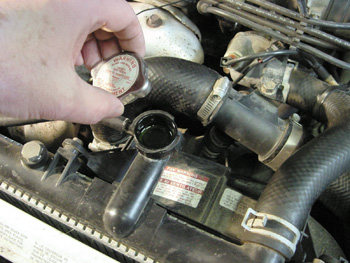 When To Sell Radiators
Assuming normal maintenance has been performed, radiator service should take place after most of them fail, which is around 100,000 miles of service. Even so, the mechanical condition of the radiator should be determined when it is removed for repairs like timing belt or engine replacements. If the coolant is extremely rusty, the radiator core tubes can be clogged with rust particles. In some cases, abrasion from rusty coolant can actually wear out the hose connections on the plastic header tanks. If the radiator is seeping coolant from the header tank seals or if the core tubes and cooling fins are seriously damaged, the radiator should be replaced.

It’s also important to sell the correct radiator for the application. Some vehicle lines might, for example, offer a heavy-duty cooling or towing package requiring a slightly larger-capacity radiator. In other cases, a vehicle equipped with an automatic transmission might require a radiator equipped with a transmission-oil cooler. Last, it’s important to recommend new radiator hoses and, if required, new radiator mounting pads. Above all, the cooling system should be thoroughly flushed and fresh OE-recommended coolant installed to prevent internal damage in your customer’s new radiator. 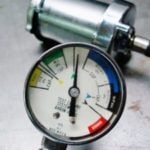 If the cooling system is not inspected and serviced as required, the system might fail well before the next extended interval oil change is due.