Bearing Components: Case vs. Through Hardening

Bearing components must have hardened rolling surfaces in order to provide long life. In general, there are two ways to harden steel to the required level: Through Hardening and Case Hardening.

In order to harden steel, the iron mix must contain a certain amount of carbon. Carbon dissolves in molten iron just as sugar dissolves in coffee. In through hardening steel, there is a high level of carbon added to the iron mix. When the component is heat treated, it becomes hard all the way through from the surface to the core, hence the term “through hardened”. Through-hardened steel components are relatively brittle and can fracture under impact or shock loads.

In the carburizing process, the low carbon component is placed in a furnace which contains a carefully controlled carbon atmosphere. It remains there for a period of time so the carbon soaks into the part’s surfaces to a predetermined depth. When the part is heat treated, the high carbon surface layer becomes hard while the low carbon core remains comparatively soft.

The ductile core is advantageous under misalignment conditions

Case-hardened steel is the recognized standard for tapered roller bearings 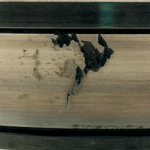 When a bearing wears out, it is usually a case of inadequate lubrication, faulty installation or improper adjustment. Learn how to avoid bearing failures. 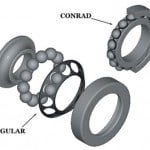 Wheel bearings are either ball (pictured above) or tapered roller type.  Front wheel bearing applications usually use an angular-type ball bearing because an angular-type ball bearing will accept greater thrust loads than a Conrad-type bearing. A tapered roller bearing will accept both a radial and a thrust load. Some rear axles will have a cartridge-type wheel…