Engine ­management ­systems ­compensate for changes in loads, engine speed, and temperatures by adjusting the amount of spark ­advance/retard, fuel injected, and even when the intake and ­exhaust valves open.

These adjustments can only do so much. Tailpipe emissions are cut further by exhaust gas recirculation (EGR) and ­secondary air injection systems. The last line of defense is the catalytic converter. But, ­catalytic converters are also the first victims if something upstream is malfunctioning.

Secondary air injection systems pump outside air into the exhaust stream so unburned fuel can be burned. Early systems have a belt-driven air pump. Newer aspirated systems use the vacuum created by an exhaust pulse to pull air into the pipe. The latest systems use an electric motor to pump air. These systems are critical for th e life of the catalytic converter.

When things heat up in the combustion chamber to temperatures around 1,300° C or 2,500° F, oxygen and nitrogen start combining with each other and form NOx and CO.

This is achieved by watering down the air/fuel mixture with inert exhaust gases. This slows down the combustion process and lowers combustion temperatures to levels where NOx does not form.NOx.

Newer vehicles with variable valve timing on both exhaust and intake camshafts can adjust timing so that a small amount of exhaust gas is sucked back into the chamber during the intake stroke.

The most critical thing to understand is that the oxygen sensors can’t detect unburned fuel, nitric oxide or the temperature of the gases coming into or out of the catalytic converter. Also, an oxygen sensor cannot determine if a coolant leak has poisoned the catalyst. It just measures the amount of oxygen in reference to Lambda and makes assumptions about what is going on inside the combustion chamber and converter.

Oxygen sensors and air/fuel ratio sensors monitor the levels of oxygen on both sides of a converter as well as the fuel trim. If the converter is doing its job, the oxygen levels on the outlet will be lower. This data is used by the PCM to make a determination on if the catalytic converter is operating efficiently. 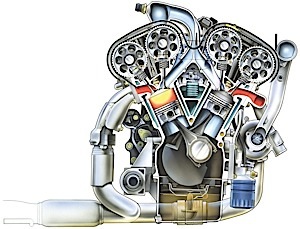 The catalytic converter contains a catalyst material that converts unburned hydrocarbons, nitric oxides and carbon monoxide into nitrogen, carbon dioxide and water. Instead of compressing and igniting the gases like a combustion chamber, the gases are passed through heated channels covered with reactive substances.

Platinum, palladium and rhodium are the reactive or catalyst that react to certain gases and substances. When these materials are heated, they break some harmful molecules into less harmful substances. With other gases, the catalysts attach oxygen to the molecules to render them harmless.

Two conditions can kill a catalytic converter. First, rich fuel mixtures and exhaust leaks can cause excessive heat which can cause the matting to erode and eventually the ceramic substrate to melt. Second, contamination from oil, coolant and other substances like sealants can block the catalyst surfaces.

Anything that gets through the combustion chamber and reaches the face of the converter can reduce catalyst efficiency. Liquids such as antifreeze from leaking manifolds and oil from head gasket failures top the list of troublemakers.

Putting It All Together

Exhaust efficiency codes are rarely set on their own. The codes might include lean, misfire and/or codes related to long-term or short-term fuel trims. If you are just chasing the codes by swapping the converter, you could be setting yourself up for a comeback.

A converter and its measured efficiency are rarely related to the surface area of the catalyst or the amount of the precious metals remaining. The setting of an efficiency code is related directly to the engine and what is happening in the combustion chamber.

One of the most effective ways to diagnose a catalytic converter is by sampling the exhaust gases with a five-gas analyzer. You may think that gas analyzers were intended for older vehicles, ancient emission standards and OE-recommended procedures, but being able to use a five-gas analyzer on modern vehicles helps you to resolve converter problems faster and with fewer comebacks because the analyzer looks at unburned hydrocarbons and NOx levels, two things an oxygen sensor can’t measure.

Understanding the inside of the combustion chamber and the impact on what comes out the exhaust valve is important in order to solve emissions or driveability problems. Read more to get help.