Does your go-to leak detection method make it difficult to find multiple intermittent leaks? How often have you been unable to find a leak until after it has resulted in an expensive system failure? Many technicians are in need of a more advanced solution. So, what is UV leak detection?
It’s a method in which a small amount of fluorescent dye is added into a system and allowed to circulate with the host fluid or refrigerant. The mixture then escapes and accumulates at all leak sites. By scanning the system with a leak detection flashlight, all leaks will glow brilliantly, making them easy to spot.

Sooner or later, air conditioning systems are going to develop leaks. And even small leaks, if left undetected, will result in the loss of expensive refrigerant and possible damage to the A/C compressor and other components. Fluorescent dyes don’t require an operating system, as long as the dye was added prior to the refrigerant charge being lost. Many car manufacturers are installing A/C systems with a Tracer Wafer™, an absorbent substrate of inert material saturated with a fluorescent dye which will allow for UV leak detection straight off the assembly line. To date, Tracer Wafers have been installed in over 250 million vehicles worldwide, including hybrid cars. If a Tracer Wafer has not been installed, a liquid form of the dye is available in the aftermarket for all systems including hybrid and R-1234yf.

A/C Dyes Should Be Co-solvent Free

Co-solvent based dyes can impair the properties of the A/C system’s lubricant, resulting in diminished viscosity and lubricity. For example, dyes formulated with the co-solvent Aromatic 200 are detrimental to the operating parameters of oil due to its low viscosity. Another co-solvent often used by dye manufacturers is NMP or N-menthylpyrrolidone. This co-solvent is known to be harmful to aluminum, light metals, rubbers, and plastics. Both Aromatic 200 and NMP are listed in the Pesticide Action Network (PAN) as Bad Actor Pesticides because of their reproductive or development toxicity or carcinogenicity. By choosing a dye that is co-solvent free, any potential compatibility issues will be minimized.

Nervous About Voiding Your Equipment’s Warranty?

Some A/C dyes are approved by manufacturers, and can remain safely in automotive/heavy duty systems for their lifetime. It’s about choosing the right dye for you. Check the dye manufacturer’s specifications for an OEM approval indication.

Look for the label before you buy! 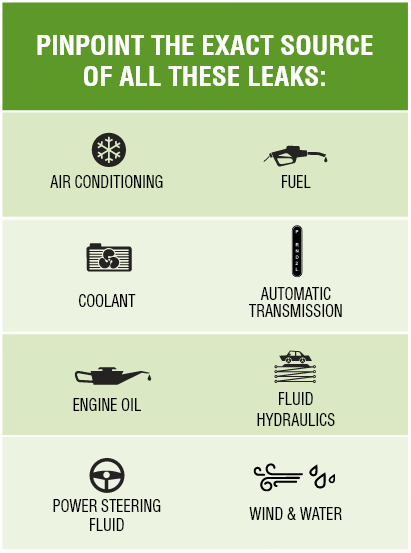 Dyes For Other Systems

Coolant Dyes
The way today’s cooling systems are designed, coolant leaks can be tricky to diagnose. There are basically two kinds of dyes on the market for coolant systems, universal and extended-life. Universal dyes will change the color of the antifreeze; extended-life dyes will not. For this reason, most technicians prefer extended-life dyes.

Oil-Based Dyes
Oil-based systems, such as lubrication, fuel, power steering and transmissions require an oil-based dye to find leaks. Universal dyes are more versatile and cost effective, but some customers may prefer a dye specific to a particular system. 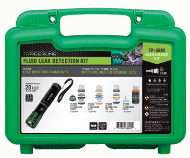 How To Choose The Right Light Source

There are several factors to consider when choosing a light source. For instance, how much do you want to spend? Flashlights which emit blue light are typically more affordable. Do you want your flashlight to be battery operated or rechargeable? Many technicians would prefer to keep batteries on hand than to remember to charge their flashlight. Is a specialty flashlight needed? For example, the VioMAX Plus™ (shown on p.6) is designed to view leaks in hidden and confined spaces. Lastly, the most important decisions when choosing a flashlight is deciding what type of light it will emit: UV, Blue or Violet. 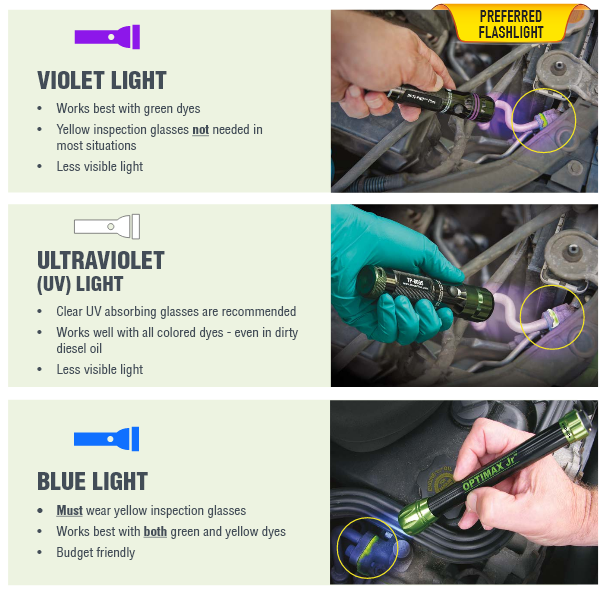 Direct sunlight may make it difficult to see the glow of the fluorescent dye.
Solution: Inspect for leaks early or late in the day, or shade the suspected area.

Line of sight doesn’t always allow for proper inspection.
Solution: Light can be bounced off an inspection mirror to view difficult areas. Also, flexible shaft UV inspection flashlights are available for such circumstances.

There is a time delay after adding dye into systems before inspection can be performed.
Solution: Dye can be added to a vehicle before a problem presents itself. It will then be fully circulated and the system will be ready to inspect when needed.

How do I know if another technician has added dye to an automotive system?
Solution: Tamper-evident straps are a good way to alert other technicians of the addition of dye. These straps can also be placed on the system to warranty your work and guard against unqualified repairs. Tamper-evident sleeves are another way to indicate when dye was injected. Doing this will also safeguard recovery equipment and ensure customer loyalty. 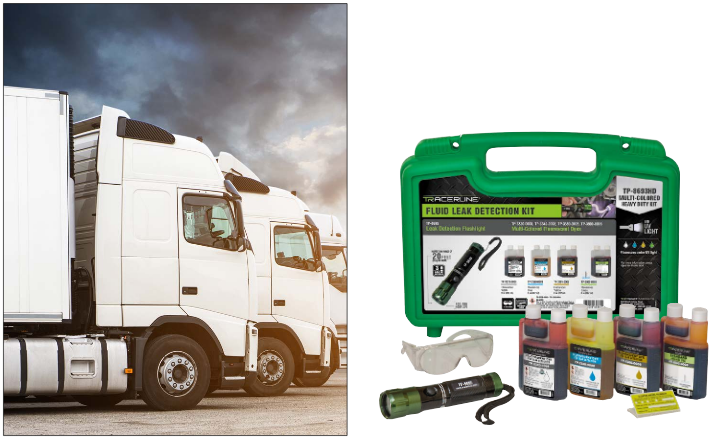 No matter how small, every leak has the potential of becoming a major problem. Methods of preventative maintenance – such as ultraviolet fluorescent leak detection – can accurately detect leaks in your vehicle’s fluid-based systems. Comprehensive, multi-color dye kits are designed for the total inspection of a vehicle’s critical fluids – such as power steering fluid, transmission fluid, coolant, and more. A mechanic equipped with a full set of multi-colored dyes can quickly identify and isolate leaks in all fluid systems, across the entirety of a large fleet of vehicles. These fluorescent dyes are also available for air conditioning systems – capable of detecting leaks in hoses, the A/C compressor, and more.

Every year thousands of large trucks, passenger buses, and other heavy duty vehicles need regular maintenance. The Department of Transportation performed a survey and found the average operating cost of a commercial truck is $180,000 per year. Repair and maintenance accounted for 10% of those operating costs (or approximately $18,000). Kits such as the Tracerline® TP-8693HD UV Multi-Colored Fluid Dye Kit provide ensured leak detection without damaging or altering a vehicle’s critical, fluid-based systems – saving commercial trucking companies hundreds of thousands of dollars per year.

Tracerline® offers four different injection methods, each appropriate for the size of the system being serviced. 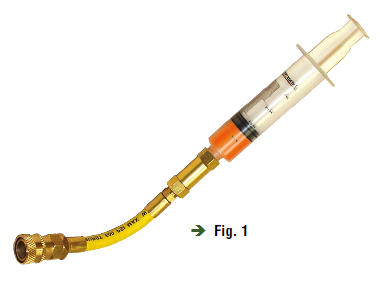 TP-9881
Bottled dyes are extremely cost effective, as they accommodate dye purchased in bulk. There are two popular bottled dye injectors for A/C systems. A syringe injector (like the Tracerline® TP-9881 shown in Fig. 1) is used to manually inject dye into a vehicle’s A/C system. 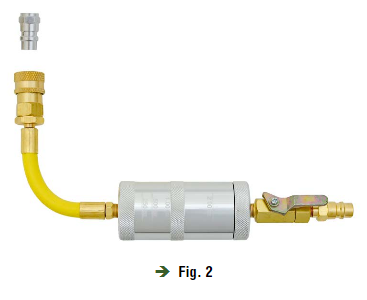 TP-9882
Another popular option when using bottled dyes is a refillable inline injector (like the Tracerline® TP-9882 shown in Fig. 2). This is recommended for vehicles with larger AC&R systems as it holds up to 2 ounces of dye. 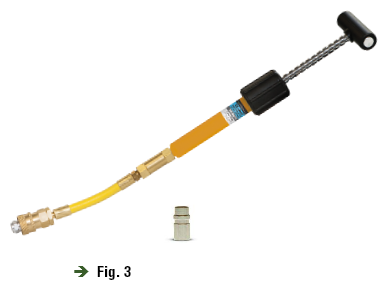 EZ-Ject™ AND Mini-EZ™
The simplest way to add fluorescent dyes into vehicle air conditioning and refrigeration systems, without the use of additional refrigerant, is by using Tracerline’s EZ-Ject™ injector (shown in Fig. 3). Available with multi-dose EZ-Ject or single-dose Mini-EZ™ cartridges, it’s one of the most accurate and compact methods of injecting A/C dye. Multi-dose cartridges service up to 14 vehicles, while the single-dose cartridge offers better inventory control with single billable servicing. 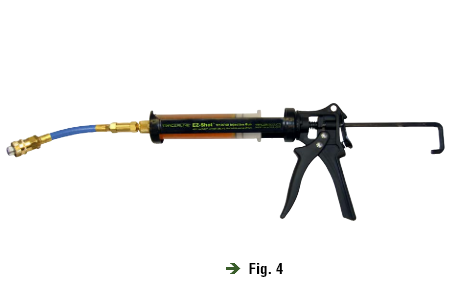 EZ-Shot™
Larger multi-dose dye cartridges are cost efficient when working on large fleets of vehicles. A multi-dose injector (like the EZ-Shot™ shown in Fig. 4) can be used to inject dye into an A/C system with a single hook up. Simply squeeze the trigger to inject the dye. Its pistol-grip style allows for super-fast dosing. Using an 8 oz. cartridge, this injector can service up to 64 vehicles. 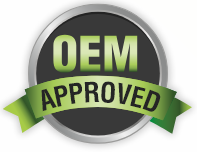 Tracerline® dyes are OEM approved by major vehicle, compressor, lubricant, and refrigerant manufacturers worldwide. They are the only dyes that are added to A/C systems on the vehicle production line by auto makers in the U.S., Japan, Germany, the U.K., Italy, France, Sweden, China, Korea, Brazil, and Mexico.

For information on all of our fluorescent leak detection products, please visit www.tracerproducts.com.
For questions or inquires contact Tracerline here. 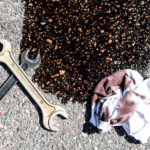 When you find fluid leaking from your car, you need to act fast to fix the leak. If the fluid is dark and oily, it’s most likely engine oil. A reddish fluid will indicate there’s some leaking transmission fluid. If the fluid is green, red, orange, or another bright color it could be washer fluid or coolant. 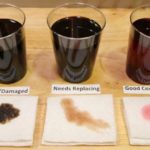 Your automobile needs to be serviced on a regular basis. If not, critical parts could fail – placing at risk the time and money you put into your vehicle. One of the easiest and most accessible ways to make certain your vehicle is operating in top-notch condition is checking the various fluid-based systems of your car.