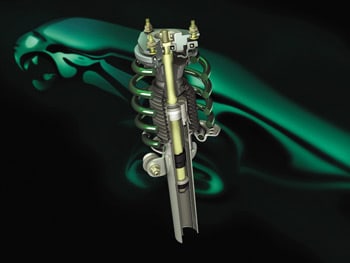 A MacPherson strut consists of a piston connected to a rod in a tube of oil. A series of valves control the oil flow to control the pitching and rebound in the suspension system. A hydraulic dampening system is subject to foaming due to heat helping air to mix with the oil in the tube. Foamed oil reduces the dampening capacity and results in loss of ride control. Foaming is suppressed by pressurizing the strut with nitrogen gas. Ride control is also improved by tuning the compression and extension rates of the strut. Manipulating this ratio allows the strut to easily absorb bumps without reducing rebound recoil resulting in a smoother ride with high speed stability. Vehicle with electronic ride control manipulate the ratio electronically to adapt to the performance level needed. When these systems wear out, there is a loss of ride and stability control. 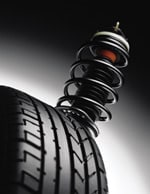 The MacPherson strut plays an important role in modern suspension geometry. It allows the lower control arm to swing with a bigger arc without affecting the camber angle of the wheel. This allows the tire to maintain better contact with the road even under extreme conditions. In most applications, the for-and-aft position of the lower control arm is maintained by connecting a radius rod from the control arm to the frame. In other, more complex applications, the strut suspension might combine the features of both the MacPherson strut and Short-Long Arm (SLA) suspension systems to make the system more durable.

The MacPherson strut also defines modern steering geometry. The tilt of the strut is part of the SAI and caster angle. SAI establishes camber angle during turns and also helps the steering wheel to return to center. Positive caster angle, which is equivalent to the backward tilt of the steering fork in a bicycle, reduces steering wander and helps establish the camber angle and toe-out of the front wheels during a turn.

When diagnosing a steering or tire wear issue, it is important to check the front suspension for bent or broken parts. The strut can bend near the steering knuckle connection point or the piston rod itself can be bent. Either condition will cause the camber angle, steering axis inclination and, perhaps, the steering radius or Ackerman Effect to change on that wheel. Checking wheel alignment can help diagnose suspension damage. For example, if the driver’s-side suspension is well within specification and the passenger’s-side is well out of specification, it’s possible that the lower control arm, radius rod, tie rod, steering knuckle or strut on the passenger’s side might have suffered collision damage. In general, if the camber angle is out of specification and can’t be adjusted, it’s entirely possible that the steering knuckle, as well as the strut, is bent.

The most important part of any steering and suspension inspection is starting the engine and driving the vehicle into the service bay. When the engine is started, the steering wheel should remain steady and the power steering should smoothly turn from lock-to-lock and return to center as the vehicle accelerates. If the steering turns slightly as the engine is started, the vehicle might have a defective steering gear. If the steering wheel doesn’t return to center, make it a point to inspect the strut support bearings during a strut replacement. The next step in the inspection is to perform a conventional rebound test. In this test, the front of the vehicle should be bounced by either placing a knee on the front bumper or carefully placing your hands on the front core support or other substantial part of the front body clip. The suspension should dampen on the first rebound. Springs on luxury vehicles are generally noticeably softer. If squeaks or knocking sounds accompany the rebound, locate those noises by using a mechanic’s stethoscope or by placing your fingers on suspension pivot points while a partner bounces the suspension. If a suspension rattle occurs at low speed on uneven surfaces, the strut’s piston rod bushing or an inner tie rod end might be worn. In some cases, strut rod and other wear can be detected with the suspension unloaded and at full extension. While you’re at it, check the piston rod seal for oil leakage. While some “dry” seepage is normal, the appearance of raw oil around the seal indicates severe leakage. Last, check the suspension height. If the vehicle isn’t level or at the specified height, check for an under-inflated tire or incorrect tire size, sagging spring or a strut assembly that has either lost its gas charge or is sticking due to mechanical failure such as a piston becoming detached from the piston rod.

Replacing struts should only be done by professionals unless a loaded strut is being installed. Strut replacement allows the rest of the suspension system to be inspected in an unloaded state. The inner tie rod end connected to the steering rack should demonstrate preload. At the very least, an inner tie rod end shouldn’t rattle when tugged back and forth. In most cases, outer tie rod ends are preloaded and should be compressed with a pair of water pump pliers to detect excessive wear or inspected during a “dry” steering test with a partner turning the steering wheel. While doing this, check the steering rack boots for oil leakage or ballooning. As for suspension wear, remember that the lower joint is a “follower” joint that is preloaded to maintain precise toe angle alignment. If the strut is removed, inspect the lower control arm and radius rod bushings for looseness. While the lower ball joint and lower control arm and radius rod mounts have only a very slight effect on caster and camber angles, they have a major effect on the toe angle if they allow the wheels to follow ruts in the road. Wear at any lower, unloaded control arm mounting point will cause steering wander and excess tire wear. Since the upper strut bearing supports the weight of the vehicle, it should be replaced if not in excellent condition. Strut rebound pads and boots should also be replaced to increase the life of the strut. On a different note, some aftermarket manufacturers are supplying replacement struts as complete assemblies, including a new spring and accessory components. In the short term, these assemblies might be more expensive, but are much less labor-intensive to install. In the long term, they will likely be more profitable and provide better customer satisfaction by addressing most of the issues associated with servicing worn MacPherson struts. 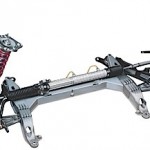 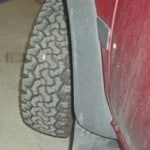 Steering geometry problems are some of the most overlooked causes of tire wear. These problems can easily be avoided with the help of a thorough inspection.