What are OAPs and OADs? And how do they fail? 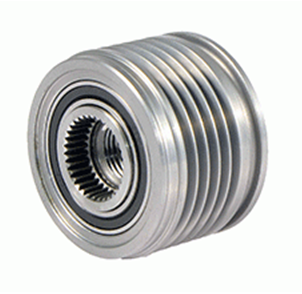 While solving a similar problem, OAPs and OADs do have different characteristics and operate differently within a vehicle’s front end accessory drive. Both OAPs and OADs provide the ability to decouple the direct drive of the engine (through the belt) to the alternator. However, they are quite different in how each function. Obviously, these pulleys are vastly different from traditional (solid) pulleys design and function.

An OAP allows the alternator to freewheel when the belt speed drops. OAPs are engineered with one-way clutches that provide the ability to allow the rotational inertia of the alternator to “overrun” during any belt deceleration event. This can occur during upshifts of the transmission, during vehicle deceleration, and when the engine stops. OAP’s often are found on automotive diesel engines that exhibit torsional vibration in the engine during running as well as during engine shut down. This is accomplished by using the one-way clutch that allows “freewheeling” one direction, but locked engagement the other rotational direction to drive the alternator. This freewheeling/locking feature’s function is what normally fails over time and requires replacement of the complete OAP.

OADs typically have one-way clutching capability, but also provide rotational isolation through an appropriate spring mechanism. The advantage here is that this spring arrangement allows small rotational displacements within the

OAPs and OADs are application-specific replacement parts and if a vehicle requires an OAP or OAD, the same category of pulley must be installed. Also, proper tools need to be used to remove and install these pulleys. OAD to isolate the direct connection to the alternator. OADs are becoming the design of choice for many newer applications. OADs have both a one-way function and the spring which allows the OAD to isolate and dampen the drive from the alternator upon deceleration.

Signs of a failing OAP or OAD:

Inspecting the OAP or OAD: 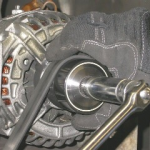 Learn the proper way to conduct a overrunning alternator decoupler pulley inspection procedure both on the vehicle and off the vehicle.