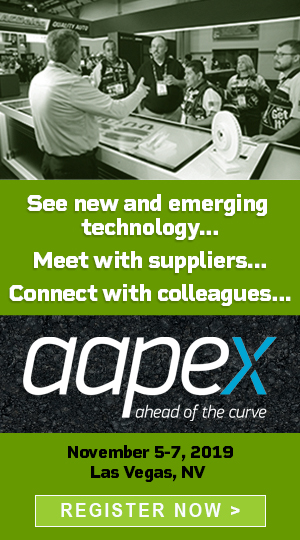 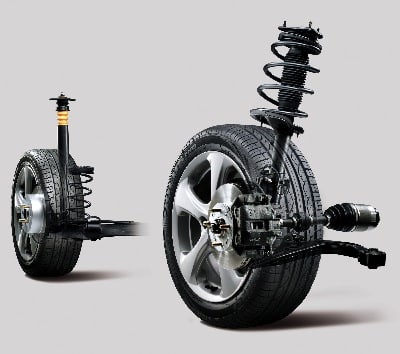 Ride height affects tire wear, steering, and handling. If the chassis is sagging then weak springs are likely the cause. Measuring the ride height and checking it against the specifications for the vehicle can determine whether new springs are needed or not. When replacing springs, they should be replaced in pairs to make the ride height uniform. Weak springs are more likely to fail. Modern springs are coated with plastic to protect from corrosion, but if the plastic cracks or breaks, the springs can become corroded and potentially break. Bushings are made of rubber or urethane and usually fail with age. Old bushings can cause noise, and greasing them will quiet them, but they should be replaced.

Suspensions are strong enough to take a lot of punishment without getting damaged. After tens of thousands of miles, suspension and ride control components will wear out. The rougher the roads, the harder the pounding, and the faster these parts will wear out. Symptoms of bad shocks or struts include:

Estimating how many miles a set of OE shocks will last is difficult because it depends on the road conditions and how the vehicle is driven. Driving on smooth roads will cause much less wear than driving on roads with lots of bumps and potholes. Some aftermarket manufacturers say 50,000 miles is the limit for shocks in average driving conditions, but some must be replaced sooner if they are used on rough roads. The traditional bounce test is a good test for worn shocks or struts. Rock the vehicle several times then stop. If the vehicle continues to rock for more than one or two times, then the dampers are worn out. Many vehicle owners never replace their shocks or struts. The dampers were never changed because the owners either didn’t find it necessary or didn’t know they were worn out. A worn out set of shocks won’t stop a vehicle from driving, but they can make it very difficult to drive on rough roads. Though most toe alignment problems can usually be traced to worn tie rod ends, camber and/or caster misalignment may indicate a bent strut. The tubular steel construction of a MacPherson strut makes it quite stiff and strong but not invulnerable. A hard hit against a curb or deep pothole can bend the strut housing or shaft, causing the wheel to go out of camber and/or caster alignment. If the alignment is altered by more than half a degree can cause steering pull or uneven tire wear. This type of damage is usually found when doing an alignment and the angles won’t meet specs even at the maximum adjustment.

Never reuse the upper bearing plate with a set of new struts. Install new plates or use a preassembled strut that comes with a plate bearing.

Shocks and struts should be replaced in pairs. Gas shocks do not need to be primed like non-gas shocks before installation. This is done by holding the shock upright and pulling it all the way out, then turning it upside down and pushing it all the way in. Repeat this several times until the shock pumps smoothly in both directions. Don’t forget to realign the wheels after replacing the struts. Finally, don’t overlook the opportunity to offer your customer performance shocks and struts if such products would provide improved handling over the stock dampers. High-pressure, gas monotube shocks and struts are a popular upgrade and are available for most import vehicle applications. You can also get adjustable high-pressure gas shocks and struts that have variable valving, so the ride characteristics can be changed depending on the type of driving your customer is doing. Really stiff dampers are great for handling, but are not so comfortable for everyday driving on rough roads. 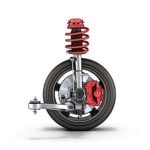 The Effects of Shock and Strut Wear

Even under normal conditions on a smooth road, shocks stroke an average of 1,750 times for every mile traveled. This is why shock and strut wear is common. 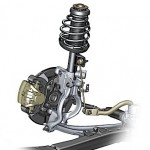