Engine oil and coolant leaks should not be ignored. Topping off the levels is often more costly in the long run than repairing the leaking gasket or component. Advising a customer about the potential damage that can occur if they decline a leak repair is not a scare tactic, it is important that they know the real price of their decision.

Oil leaks can leave greasy, ugly stains on your driveway, but the real danger is potential engine damage or failure if your engine runs low on oil.

Oil leaking at the back of the engine may also cause the clutch to slip if the vehicle has a manual transmission. Oil can also produce blue smoke and unpleasant odors if it drips onto a hot exhaust manifold or exhaust pipe. 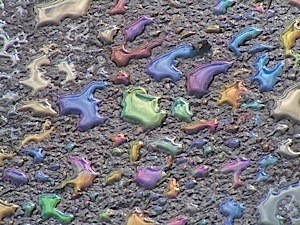 After six or seven years of service, the engine may start to leak oil. The older the engine, the more likely it is to leak oil due to aging gaskets and seals. As an engine ages, heat can cause cork gaskets to harden and shrink. Heat can also cause rubber (neoprene) gaskets and seals to harden and lose elasticity. Engine oil leaks occur most often at the valve cover and oil pan gaskets, timing chain cover and the front and rear crankshaft seals.

Oil leaks can also occur if the crankcase is overfilled with too much oil, or the positive crankcase ventilation (PCV) system is clogged, allowing pressure to build up inside the engine.

When oil leaks out of an engine, it attracts dirt. So, look for greasy stains around or below gasket seams and seals. Sometimes you can see oil dripping out while the engine is idling, but more often than not, the oil just slowly seeps out and causes grease buildup in the vicinity of the leak.

Crankcase oil additives can sometimes help slow a leak by causing aged gaskets and seals to swell, but no additive will stop a major leak or repair a broken gasket or worn seal. Sooner or later you will have to replace the leaky gasket or seal.

The first and most important job is to make sure the sealing surfaces are clean and flat. Be careful cleaning aluminum. The soft surface can be damaged by aggressive scraping with metal scrapers. Never use abrasive discs to remove the old material. Even the use of rough sand paper can prevent a gasket from sealing.

Different gaskets have different application recommendations and requirements. Most gaskets and sets will have instructions included. Never go outside of the recommendations if possible because you may be doing more harm than good on a modern engine. 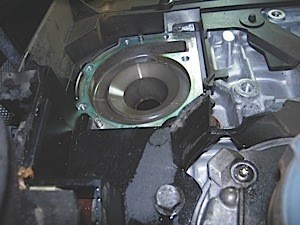 Do not over-tighten pan cover bolts as this may crush and damage the new gasket. Some gaskets have built-in steel grommets that limit how far the gasket is compressed when the bolts are tightened down. Use an accurate torque wrench and follow the vehicle manufacturer’s torque recommendations.

Some engines have bolts for the oil pan and valve covers that come with a torque spec and a torque angle spec. The bolts for these pans are torque-to-yield and require replacement if the pan is removed. If the bolts are reused, the pan and gasket will leak. Some of these bolts are made of aluminum, and the threads can strip easily.

When sealing up an oil leak, use a sealant that is a low volatile silicone approved for use with oxygen sensors. Some silicones contain chemicals that can be drawn through the engine’s PCV system and contaminate the oxygen sensor.

To replace a leaky seal on the front of the crankshaft, the crank pulley/harmonic balancer must be removed before the seal can be pried out, which requires a gear puller. Do not pound on the pulley/balancer because this may damage it. If the surface of the crankshaft is worn, a slip-on repair sleeve can be installed to restore the surface. A special seal is usually required with a repair sleeve.

Leaky rear main crankshaft oil seals are time consuming to replace because they involve dropping the oil pan and unbolting the rear main crankshaft support cap inside the engine. On applications that have a one-piece rear main oil seal instead of a split seal, the flywheel has to come off, which means pulling the transmission.

Coolant leaks can occur anywhere in the cooling system. Nine out of 10 times, coolant leaks are easy to find because the coolant can be seen dripping, spraying, seeping or bubbling from the leaky component. The first symptom of trouble is usually an engine overheating, but the vehicle may also have a low coolant indicator lamp. If you suspect the vehicle has a coolant leak, visually inspect the engine and cooling system for any sign of liquid leaking from the engine, radiator or hoses. The color of the coolant may be green, orange or yellow depending on the type of antifreeze in the system. You may also notice a sweet smell, which is a characteristic odor of ethylene glycol antifreeze.

Most cooling systems today are designed to operate at 8 to 14 psi. If the radiator can’t hold pressure, the engine will overheat and lose coolant. 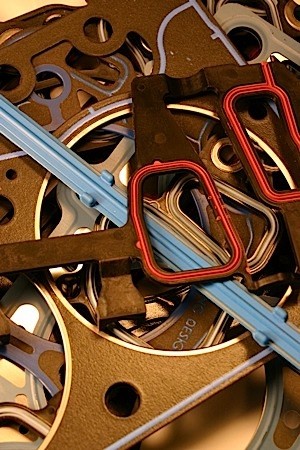 Water pump: A bad shaft seal will allow coolant to dribble out of the vent hole just under the water pump pulley shaft. If the water pump is a two-piece unit with a backing plate, the gasket between the housing and back cover may be leaking. The gasket or O-ring that seals the pump to the engine front cover on cover-mounted water pumps can also leak coolant. Look for stains, discoloration or liquid coolant on the outside of the water pump or engine.

Hoses: Cracks, pinholes or splits in a radiator hose or heater hose will leak coolant. A hose leak will usually send a stream of hot coolant spraying out of the hose. A corroded hose connection or a loose or damaged hose clamp may also allow coolant to leak from the end of a hose. Sometimes the leak may only occur once the hose gets hot and the pinhole or crack opens up.

Intake Manifold Gaskets: The gasket that seals the intake manifold to the cylinder heads may leak and allow coolant to enter the intake port or crankcase or allow it to dribble down the outside of the engine.

These are the worst kind of coolant leaks because they are hidden inside the engine.

Head gasket failures are often the result of engine overheating (which may have occurred because of a coolant leak elsewhere in the cooling system, a bad thermostat, or an electric cooling fan not working). When the engine overheats, thermal expansion can crush and damage portions of the head gasket. This damaged area may then start to leak combustion pressure and/or coolant. 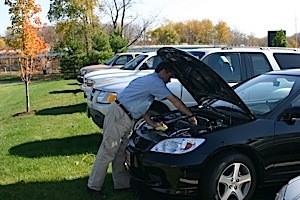 There are several ways to find out whether or not a cooling system is holding pressure. One is to top off the cooling system, tighten the radiator cap and start the engine. When the engine reaches normal operating temperature, turn on the air conditioner (to increase the cooling load on the system) and/or take it for a short drive. Then check the radiator, hoses and water pump for seepage or leaks.

Leak detection dye can also be added to the coolant itself to make a slow leak easier to find. Some of these dyes glow bright green or yellow when exposed to ultraviolet light.

Even the smallest leak in an intake manifold can cause a fuel trim problem. The extra air is unmetered and can lean the fuel/air ratio leading to check engine codes and driveability issues.

Finding an intake leak can be time consuming using your eyes and ears.

Intake manifold air leaks will suck in air, not expel it. What is sucked in will influence the fuel mixture and impact engine and emissions systems.

A smoke machine allows you to diagnose multiple leaks in less time compared to other methods. A smoke machine can pressurize the intake manifold and put smoke or vapor into the system. If there is a leak, you will see smoke come out.

Connect the smoke machine to a vacuum port like the supply line to the brake booster. Make sure to block the throttle body with the right-sized plug. Also, block off the PCV system.

Leaking injector seals can cause lean and misfire codes. Conventional testing methods often involve flammable gases or putting thick oils on the seals and looking for a change in rpm, but this test can’t be performed on engines where the intake manifold restricts access. Smoke machines can help spot these leaks without any disassembly.

Smoke coming from the oil filler or PCV system on an engine that is not misfiring could mean the bottom of the manifold is leaking or has cracked. It can also indicate worn valve guides or seals. 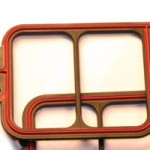 When servicing high-mileage engines, pay close attention to the condition of the sealing surfaces as this could affect the intake manifold gaskets.