Liquid coolants (usually a half and half mixture of water and ethylene glycol (EG) based antifreeze) are used to manage heat in automotive internal combustion engines. The coolant helps prevent corrosion in the cooling system, and also carries away the engine’s waste heat. 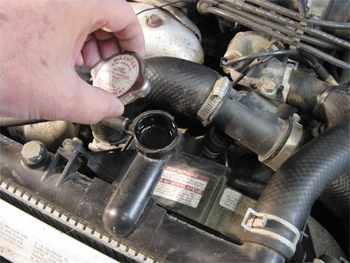 Water is used because of its ability to absorb and carry heat efficiently, but it provides no corrosion protection, and has a limited operating range due to its freezing and boiling temperatures (32 degrees F and 212 degrees F). Pressurizing the cooling system with a spring-loaded radiator or coolant reservoir cap can increase the temperature at which water boils. For cold-weather operation, water has to be mixed with something else to lower the temperature at which it freezes. Adding ethylene glycol in equal parts with water lowers the freezing point to -34 degrees F while also raising the boiling temperature to 265 degrees F (with a 14 PSI cap).

Why not use straight ethylene glycol? It carries heat 15 to 20 percent less efficiently than water and although it boils at 386 degrees F, it freezes at 10 degrees F, which is not low enough to provide adequate freezing protection in cold climates.

Various types of corrosion inhibitors are added to antifreeze to prevent oxidation and corrosion inside the cooling system. Corrosion occurs when oxygen and dissolved minerals or salts in the coolant react with metal surfaces. Corrosion can also occur as a result of electrolysis, an electro-chemical reaction between dissimilar metals (such as aluminum and cast iron), or from stray electrical currents that pass though the coolant due to poor grounding between the engine and chassis.

In general, corrosion inhibitors keep the coolant slightly alkaline chemically (as opposed to acidic). This keeps corrosion in check as long as there is enough inhibitor to neutralize the acids. Over time, the coolant eventually becomes acidic. At this point, corrosion starts and bad things start to happen.

Up until the mid-1990s, there was essentially one type of coolant in general use: the traditional “green” formula coolant. This type of coolant contains fast-acting but relatively short-lived corrosion inhibitors that last about two to three years, or 24,000 to 36,000 miles. Green formula coolant is still available for older vehicles, but is not recommended for newer vehicles that came factory-filled with a long-life coolant.

Long-life coolants use various Organic Acid Technology (OAT) additives to achieve a service life of up to 5 years or longer, or 150,000 miles. Some aftermarket long life coolants even claim “lifetime” protection (for the original vehicle owner).

Coolants developed for different vehicle applications are dyed different colors. General Motors Dex-Cool is orange, and contains no silicates. The GM service specification is GM 6277M. Ford and Chrysler both specify a Hybrid Organic Acid Technology (HOAT) formula that is dyed yellow and contains silicates for added aluminum protection. These are referred to as “G05” coolants. Chrysler changed from green formula antifreeze to yellow HOAT in 2001, while Ford changed over their trucks in 2002 and their cars in 2003 to HOAT. The Ford HOAT specification is WSS-M97B51-A1, and the Chrysler HOAT specification is MS9769. However, on some newer applications such as Ford trucks with 6.7L diesel engines, Ford has gone back to an orange OAT coolant similar to GM Dex-Cool.

The Asian and European car makes also have their own coolant specifications and colors, which makes it confusing for motorists to figure out which type of coolant is the correct one for their vehicle.

The aftermarket solution for this is to give the public what it wants: replacement coolants formulated for specific vehicle applications (domestic and import) as well as “universal coolants” that are suitable for all makes and all models. The latter products simplify inventory requirements and the selection process, while the former provide specific coolants for those who want them. One brand of coolant is also available that uses less-toxic propylene glycol (PG) as its main ingredient instead of ethylene glycol. Performance is similar to EG coolants, but there is less danger of accidental poisoning if a pet licks up coolant from a spill.

Universal coolants typically use a proprietary OAT formula that may or may not contain silicates (to meet the GM requirements), and no phosphates or borates (to meet European and Japanese requirements). Universal coolants can be mixed with ANY type of coolant, including the older traditional green formula coolants, and can be used to refill almost ANY year/make or model of passenger car or light truck. We say almost any application because some experts say a traditional green formula coolant still provides the best corrosion protection for older vehicles with copper/brass radiators. All types of coolant are available in ready-to-use premixed containers (which contain half antifreeze and half water), or in full strength containers (which must be diluted and mixed with distilled water when added to the cooling system). 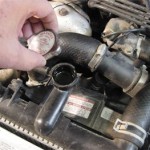 A History of Automotive Coolants

Liquid coolants (usually a half and half mixture of water and ethylene glycol (EG) based antifreeze) are used to manage heat in automotive internal combustion engines. The coolant helps prevent corrosion in the cooling system, and also carries away the engine’s waste heat. Water is used because of its ability to absorb and carry heat…