When changing hub bearings or testing ABS systems, it’s important to know what type of ABS system the vehicle has so that the hub bearing can be properly tested and replaced if required. As hub bearing technology continues to advance, certain tests that were once performed for Passive ABS systems are no longer performed in the same manner for the newer Active ABS systems.

Here are some of the key factors of each of these two systems.

Identify which system is on your vehicle

To identify which system you have, conduct a back probe test. With the ignition key in the on position and the ABS sensor connector still plugged in, look for a reference voltage with a volt meter. You may also note that in some cases the ABS cord wire for the Active ABS systems are slightly thinner than the Passive ABS cord. See attached figures on next page.

It is recommended to follow manufacturer’s guidelines for all ABS testing.

One of the most common mistakes that can occur is to conduct an Ohms reading test on an Active two wire ABS system. This test will show an open reading and may lead you to believe that you have a bad ABS sensor or hub. The two systems differ in the way signals are generated and conducting the wrong test for either system may provide false results. 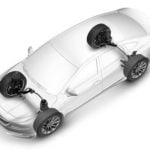 What Exactly is an Active Shock or Strut?

What exactly is an “active” shock or strut? For a shock or strut to be active, it must be able to react to three critical streams of information. First, it must act on information from the ABS and stability control system. Second, it must measure body movement. Third, it must detect the extent and rate…