How to Replace an Inline Fuel Filter

See how to safely and efficiently remove and replace an inline fuel filter.

In this video, we’re gonna give you some tech tips on how to replace an inline fuel filter. We always put safety first, so make sure that you are thorough and you’re careful. Don’t get in a hurry. Don’t forget to wear safety glasses and gloves, have a fire extinguisher on hand, and work in a well ventilated area away from anything that could have a flame or spark.

Changing an inline fuel filter is gonna be some day in the future a thing of the past because filters are being mounted inside the pump assemblies. But, there are millions and millions of cars on the road that have inline fuel filters that need service and they need them now.

Now, before we get started, a little bit about safety. Safety glasses or goggles, safety gloves, and a stand with a drain pan to catch the fuel. You’ve also, the very first thing you’ve done, is depressurized the fuel system. I pull the fuse, let the engine run out of gas. If it’s a high pressure system like GDI, which you probably wouldn’t find an inline fuel filter like this, I would definitely make sure with my scan tool there was no pressure on the fuel rail. And after that, after you depressurize, you’re still gonna have a bit of a mess, so we’re gonna deal with that with the pan.

Now, the older filters typically had a compression nut type of fitting. And a lot of techs who worked on them in the day, and they’re still out there on the road, made the big mistake of rounding off that little nut, the five-eighth nut, on the end of the fuel line. We’ll demonstrate like this. By simply applying too much slow torque to the fuel line. So, you should soak the fuel line, the nut … the compression nut … with some solvent, some penetrant, and then with line wrenches, what you do … here’s the trick … instead of you using your biceps to do the work, you lock your elbows, and use your shoulders to rock back and forth in like an impact wrench fashion.

The other styles are pretty much versions of what we have here. Before those popped up though, we had the worm drive clamp and the hose … the hose clamp and the worm drive. The thing I wanna mention there real quick here is that instead of using a screwdriver … bad news for your hand sometimes when the screwdriver slips and the hose clamp … use a nut driver to tighten that hose clamp. Now, make sure you’ve got good quality hose clamps from your supplier. Now, the style we have here today, we’re gonna take down just using the quick disconnect type coupler. Now this particular one in my hand, it’s pretty easy to work, but again, a little bit of penetrant is not a bad idea because it’s gonna loosen things up.

So, you squeeze these little tabs … these little white tabs right here … and as they’re both squeezed, you can almost hear the thing pop and it will come out. When you get it out, you make sure … this will be the line that stays with the car … when you get the thing out, you wanna make sure that that little O-ring in there is intact. It’s not split; it’s not missing or whatever. And a little bit of oil on that goes a long way to help it go back on and snap back into place when you change the new filter.

Other styles that are out there, and we see on this particular car it’s on the fuel pump itself, but that’s the style that needs this little tool ran in along the length of the fuel line … like that … and it depresses some plastic tabs and that causes it to give way, release, and the hose comes off. And what we’re gonna do, we’re gonna drain it. Basically, we’re gonna get them loose first, and then we’re gonna take the mount loose and then we’re gonna drain the thing. We’re gonna hang the whole thing down. But what this style, how it works is, you can see on this end, we have a rubber cover right here. I’m gonna pop that rubber cover off … and a screwdriver … this might be too big, I might need my pocket screwdriver, it might work. Nope, it came out like a little C-clip … you’re gonna pop it out part way, and then the line will come off.

As a good idea if you drain the fuel filter, it’s gonna have a little bit of volume in it, is maybe capture that fuel in a little receptacle that’s clean so you can look at the fuel sample as you’re doing your service on the vehicle. Make sure we don’t have a bunch of water or any kind of heavy amount of dirt and sediment as we change this out. So, as a good idea, you can capture it.

So, let’s go ahead and see if we can get this line out of our way, we’ve popped it loose, do a little twisting, work it loose. It’s loose now. Capture that gasoline. What the heck? We’ll capture it for a sample, see how much we’ve got in the line, just a few drops. Most of the volume’s gonna be in the filter. I’m gonna go around the other side here and capture that C-clip on the backside on the other line going to the pump. Now that’s released. There we go. Little bit more there. Now the filter’s draining actually pretty much into my little jug. Now, just temporarily I’m gonna pop that back on but not snap it. Same thing over here. That way, when I loosen this thing up, the last thing I do is loosen the mounts. This one’s a worm drive mount, hose clamp type mount, so I’ve already soaked these with penetrant because you know how they are underneath the vehicle. You could have some real issues.

And we’ve also … looks like we’ve got some mounting bolts as well, but not required. That’s just for the mount itself. You may be wondering why I have rags around my wrists. Not only do I want safety gloves so that I’m not getting a bunch of gasoline, you know, on my skin and absorbing it in my body, but I don’t want gasoline running down my arms and down my shirt to my armpit. Rather have underarm deodorant and not gasoline in my armpit. So, that’s just a little trick I taught myself many years ago working on cars as a young technician, and it’s really been worth it. It looks a little hokey but it works.

So, this is all loose now. I’ll get the bolts into the clamps, hoses can come off and a little bit more gas, here we go. My clip … I’ll have to get that later. Now I’m gonna capture as much of that gas as a sample for a little scientific test. Making as little mess as possible. That slows down the possibilities … reduces the possibilities, I should say … of a mess to clean up later, and also any chances for fires, explosions and so forth. So, this is about all the gas I got out of this filter. It looks pretty clean so that’s not a bad, bad sign there of contaminated fuel that might eventually get past the filter or plug the filter up.

So, now I’ve done that, let’s install the new filter. We have it right here. There’s a direction symbol on there. That’s an important thing you wanna make sure. Fuel goes this way. They are directional, so pay attention to that. Go ahead and pop it in the mount through my hose clamp. I’m gonna take my pocket flashlight, and I’m gonna take a peek at those O-rings to make sure they are in good shape still. So there’s my hose, I spin it around, and there is the O-ring looking good. We don’t need lubricant now because we have gasoline, and that’s a decent lubricant. And that O-ring also looks good. So, we got good O-rings … hear it click. And we do it again. Make sure you get on the square. And hear the click. There. There’s the click. I think I had a little C-clip in here, so let’s pop that in.

So, we make sure we get a firm snap when we put the clips in place. Ba-bing, I heard it, yep. Now, we’ll go ahead with everything snapped in place, clips in place, lines pushed in, we’ll go ahead and tighten up that hose clamp from the mount, not stripping that gear on that worm drive hose clamp. And when that’s tight, it’s time to power up the vehicle. Put the fuse back in for the fuel pump. Turn the key on, let it prime up, maybe start the engine, but also look down here to make sure we don’t have any leaks, and if you don’t, you’re done. Easy. 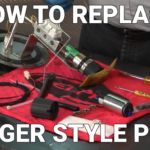 How to Install a Hanger Style Fuel Pump

In this video from the Delphi how to video series, we will show you how to replace only the electric fuel pump in a hanger style fuel system safely and efficiently.