Fuel pumps have been in use since the 1920s.  Most of the cars from that era used gravity to supply the carburetor with fuel rather than a fuel pump.  As technology progressed, gas tanks moved to the back of the vehicle to improve safety. This required the use of a mechanical fuel pump to move fuel from the back of the vehicle to the carburetor.  When carburetors were replaced by electronic fuel injection, mechanical fuel pumps evolved into high-pressure electric pumps.
Electric fuel pumps in late model vehicles spin continuously as the engine runs, and will circulate thousands of gallons of fuel in their lifetime. Not all fuel is sprayed through the injectors at low load/idle, so the fuel pump regulator returns the unused fuel to the fuel tank on most systems. One of the drawbacks of this system, other than circulating a lot of fuel, is the fuel picks up heat from the engine which it transfers to the fuel pump which can cut the lifespan of the pump.

In newer “returnless” EFI systems, the regulator is a part of the fuel pump system which eliminates the need for a return line, and helps the pump run cooler. When it is combined with a variable speed control, the volume of fuel the pump has to move decreases greatly which improves its reliability and reduces wear. 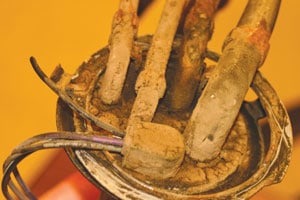 Rust, dirt, or debris in the gas tank can kill a fuel pump very quickly. Rust occurs on older steel tanks while after 8-10 years, plastic tanks start to break down. The fuel filter does almost nothing to prevent debris from entering the fuel pump. The only protection comes from the inlet screen. The inlet screen only blocks large particles and cannot block the microscopic particles that wear a pump out over time. When a pump gets worn, it may get louder and spin at lower a RPM causing starting, driveability, and performance problems. A weak fuel pump may work at idle, but fail when under load. If a pump is really weak of failed the engine will not start. To diagnose this, a pressure meter can be attached to the service fitting on the injector supply rail. If the pump fails to meet the pressure checks, the pump may still be good. The pump may not be getting enough voltage from the voltage supply circuit to operate.

Very few auto parts stores have a fuel pump test bench, but if they have one, make sure to test with a non- or low flammability liquid instead of gasoline. Doing the bench tests can tell you whether or not the pump meets manufacturer specifications. If the specs are not met, the pump will need to be replaced. If the pump is good other possibilities include wiring problems in the fuel pump circuit (loose, corroded or broken wires, bad grounds), a defective fuel pump relay or blown fuse, an obstruction in the fuel pump inlet filter or fuel line, a plugged fuel filter, or leaky or defective fuel pressure regulator. If the pump is a variable speed unit, the PCM or module that controls the voltage to the pump could be defective.

Replacement pumps are different based on make, model, year, and sometimes engine size. Replacement pumps may look different because manufacturers upgrade the designs occasionally. The appearance doesn’t matter as long as the pump performs. In-tank electric fuel pumps can usually be replaced separate from the fuel sending unit. But on some late-model applications with returnless EFI systems, it’s all one assembly and has to be replaced as a unit. It’s cheaper to replace the pump only, but it’s more convenient to replace the whole fuel pump and sending unit assembly. On older high mileage vehicles, it’s a good idea to replace the whole assembly because the plated metal electrical contacts on the fuel sender unit lever arm are often worn or corroded, affecting the unit’s ability to send an accurate fuel level signal. It is also recommended to check the fuel tank for debris and wear as well as replacing the inlet screen. 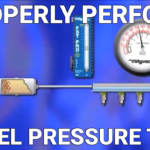