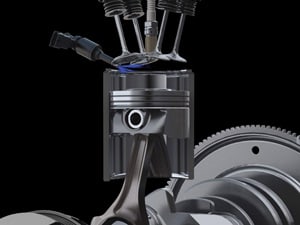 After WWII, auto companies discovered that mechanically injecting fuel into the cylinder was virtually impossible to do with the technology at the time.  Despite those setbacks, the bugs seem to have been worked out, and the concept has offered many improvements to modern day operations.

Throttle body injection was one of the first domestic fuel injection systems to enter the market to easily replace the carburetor on existing engine designs. TBI required a simple computer capable of operating multiple injectors spraying into the air going into the intake manifold. A throttle position sensor (TPS), coolant temperature sensor (CTS), manifold absolute pressure (MAP) and oxygen (O2) sensor, were the primary sensors needed to establish accurate fuel control on the engine. Fuel was delivered via an in-tank fuel pump. Although TBI was extremely simple, furel droplets built up in the intake resulting in a “wet flow” which created an uneven distribution among the cylinders. To reduce wet flow, auto manufacturers introduced multi-port injection. Multi-port injection systems were able to be timed to inject fuel as the intake valve opens. The fuel distribution remained uneven between the cylinders.

Since emissions standards continued to grow stricter, gasoline direct fuel injection (GDFI) systems have become more readily available. GDFI systems have the same basic setup as conventional MPI systems. Most GDFI use an in-tank pump to supply a high pressure pump that injects the fuel. The high pressure pump is monitored by the PCM and can change the amount of fuel entering the pump. Most pumps produce around 2,000 psi of fuel pressure to overcome the pressures generated by combustion and compression, and to inject a relatively large volume of fuel in a short amount of time. GDFI systems require piezo-electric fuel injectors, which can open the injector pintle valves at over 2,000 psi.

The most immediate advantages of injecting gasoline directly into an engine cylinder are increased fuel economy and power. There are many things that can affect how a gasoline direct fuel injection system is used, so this article will focus on the basics. A GDFI engine can be operated in stoichiometric(14.7:1 air/fuel ratio by weight theoretically produces only carbon dioxide (CO2) and water (H2O)), full-power (air/fuel ratio between 13:1 and 14:1 to achieve the most power.) and ultra-lean (air/fuel ratio varies depending on the vehicle and can exceed 50:1) modes. A fuel-stratified injection (FSI) operating strategy can also increase fuel economy. A stratified air/fuel ratio can be created by injecting a lean air/fuel mixture into the power stroke cycle immediately after the initial “rich” combustion event takes place. A stratified system has limited uses due to many problems such as exhaust valve damage. Gasoline direct fuel injection also allows engineers to actually start the engine by injecting fuel into a cylinder at rest on the power stroke and igniting it with the spark plug. This is repeated in all the cylinders in the firing sequence until idle speed is reached. This allows the engine to be turned off at stoplights to save fuel, and start again quickly. Lastly, the latent heat vaporizes the fuel and actually cools the inside of the cylinder which increases the compression ratio.

Most gasoline direct fuel injection systems can be diagnosed with a scan tool. The most recent problem is a buildup of carbon on the intake valve seals causing cylinder misfires. Most of the carbon buildup can be attributed to oil mist from the PVC system, and EGR. Last, the mechanical high-pressure fuel pumps appear to be an early failure point on current production vehicles. Remember that the low pressure pump must be working properly for the high pressure pump to work. All parts professionals must also be aware that many manufacturers might require a complete fuel rail replacement when a single fuel injector is replaced for safety reasons. As with any new technology, a professional-level service information system is vital for the successful diagnosis of the original problem and the completion of a successful repair.