The EPA has lowered diesel fuel sulfur content from 500 ppm (parts per million) to 15 ppm. This new ultra-low sulfur fuel has been available since October 2006. All 2007 and later diesel engines must comply with the new regulations that require the reduction of nitrogen oxide (NOx) and hydrocarbons (HC) by 50% and particulate matter (PM) by more than 90% over the 2004 emission standards.

The 2007 emission requirements helped introduce a throttle valve for the reduction of NOx -emissions at part throttle. A plus from the throttle is that it improves idle ¬quality. A catalytic converter with a particulate filter (see graphic) is also installed as part of the emissions-reduction package. The throttle valve is installed on the intake manifold and is operated by an electric motor. 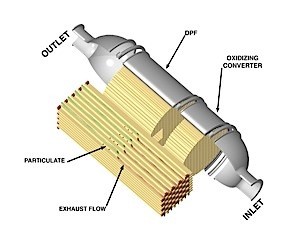 The diesel particulate filter (DPF) uses an oxidizing catalyst to control hydrocarbons. Soot and larger sulfate particles are ¬captured in the ceramic honeycomb of the DPF. Alternate passages of the honeycomb are plugged to form channels for the gases to pass through and trap particulates on the channel walls. To keep the particulates from filling the ¬channels, a regeneration process is used to ¬oxidize the carbon into carbon dioxide gas that will pass through the honeycomb.

The DPF has a life of approximately 100,000 miles for light trucks. The system will use ¬pressure and temperature sensors to monitor the DPF. Service of the DPF will require the removal and disassembly of the converter and particulate filter. The ash that remains in the DPF can be cleaned by back flushing with air and then ¬reinstalling. Cleaning equipment for the DPF is available from several sources. A new motor oil with less than 1% ash content ¬specified as CJ-4 by API will also be required for engines equipped with a DPF; it has to be used to extend the -maintenance life of the DPF filter. 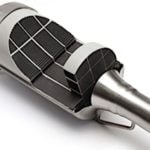 This article is about the construction and operational theory of a diesel particulate filter and covers Selective Catalytic Reduction, and regeneration.