As the new generation of vehicles begins coming into aftermarket shops, professionals will begin selling more VVT components. The current versions of VVT were introduced into domestic production about 10 years ago. The following text will use a Ford F-150 equipped with a 5.4L VVT SOHC engine with 245,000 miles on the odometer as an example of the many issues facing parts professionals on vehicles equipped with variable valve timing. 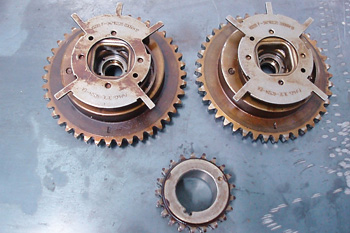 The theory behind variable valve timing is simple. Imagine a column of air speeding through a two inch pipe at 250 feet per second. When the intake valve blocks the air flow at the end of the pipe, the kinetic energy of the air causes a compression wave to form. The optimum time to open the intake valve is when this compression wave peaks in strength. In contrast, the best time to open the exhaust valve is when a vacuum wave develops at the valve.

Parts Nomenclature
The part that actually controls the camshaft position (and the valve timing event) is called a “phaser.” VVT Phaser design includes piston and vane-type configurations. In either case, the phaser uses engine oil pressure to push the piston or rotating vanes against a strong spring. With the vane-type phaser, a clock spring returns valve timing to a “default” position during engine start-up or if the VVT system fails. Another part, called a valve timing solenoid, meters engine oil pressure into the phaser. The VVT solenoid is supplied key-on voltage and the PCM momentarily grounds the circuit to meter oil pressure into the phaser until the valve timing reaches the desired value. The valve timing solenoid also includes a very fine-mesh screen to prevent sludge and debris from entering the mechanism.

Timing Chain Hardware
In the case study mentioned above, the timing chain guides and tensioners failed due to extended mileage. As a result, the driver’s side camshaft went out of time, which stored a P0022 diagnostic trouble code and illuminated the “Check Engine” warning light. The mechanic replaced both of the timing chains, the guides and the camshaft/crankshaft sprockets.

Lubrication Issues
It is extremely important to use the correct viscosity of oil in a VVT engine because correct lubrication is critical to the operation of the VVT phasers and solenoids. An oil with a higher than specified viscosity can cause false VVT trouble codes to be stored in the PCM, because VVT designs use a metered oil orifice to adjust valve timing. In addition, the oil must have the correct additive package to keep the engine’s oil passages, phasers, and VVT solenoid screens clean. The complicating factor in the above VVT diagnosis was that, at 245,000 miles, the VVT solenoid screens had accumulated enough varnish to restrict oil flow. An earlier mechanic corrected that condition by removing the screens on one solenoid. Unfortunately, the screens on the remaining solenoid were partially clogged, which caused the driver’s side camshaft to slowly retard after start-up until the engine began backfiring through the exhaust. The problem was solved by replacing the remaining solenoid. 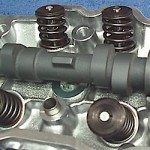 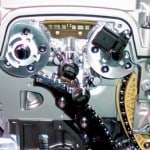