Turbo systems can increase fuel economy on gas and diesel vehicles. Improvements in turbo system technology have increased the number of turbocharged vehicles on the road and that number is estimated to quadruple in the next five years. This article is about the basic operation of the turbocharging system and features a small segment on service/diagnostics.

Turbo systems harness the wasted energy from the exhaust gases by using them to turn a turbine wheel. The turbine wheel rotation turns a compressor wheel that forces more air into the intake system. It is important to know that the turbocharger works mainly from the heat of the expanding exhaust gases. Turbochargers generate more boost under a load because the exhaust is hotter which turns the turbine faster. 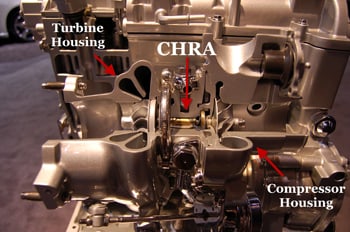 Most original equipment (OE) turbo systems have a turbocharger, an intercooler, and a way to control the boost. These parts can be modified and upgraded but this article focuses on the OE. The turbocharger consists of three main sections: compressor housing, center housing rotating assembly (CHRA) and turbine housing. The compressor housing, a.k.a. the cold side, houses the compressor wheel and is attached to the CHRA and the intake plenum. The CHRA a.k.a the bearing housing section consists of the compressor wheel, turbine shaft, turbine wheel, bearings, and oil and coolant passageways. Lastly, the turbine housing, also known as the hot side, contains the turbine wheel and an integrated wastegate.

Naturally, air temperature increases when compressed, so an intercooler is used to cool the air from the compresser to increase power output. The intercooler can be water-to-air or air-to-air cooled. Intercoolers can be mounted in several locations in front of the radiator (front mount), on top of the engine (top mount), and inside the bumper (side mount). 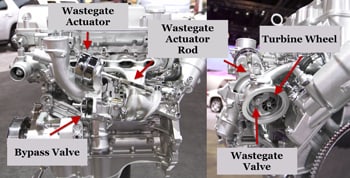 Although forcing more air in the cylinders is good, it needs to be controlled. Turbochargers use exhaust to increase air pressure which increases exhaust temperature which increases air pressure, etc. Excessive boost can cause serious damage to engine systems, so most systems use a wastegate and/or bypass valve to control boost pressure. Wastegates direct exhaust around the turbine when the turbo pressure exceeds a limit. Most OEM systems release the excess pressure back into the exhaust system for emissions purposes. 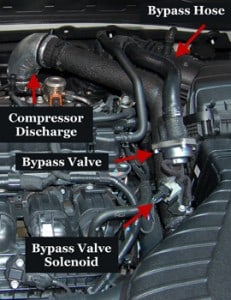 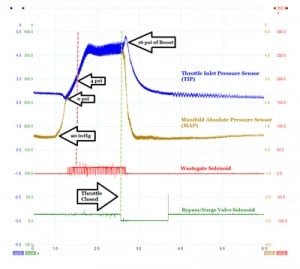 Maintenance is very similar to a regularly aspirated vehicle but maintaining the cooling and lubrication systems is more important. Technicians advise letting the turbocharger spool down after hard driving by letting the car run for a minute or so before turning off the vehicle. If the system is electronically controlled, it can be diagnosed with a scan tool and an oscilloscope. Surge is unvented boost pressure that can damage turbochargers. Most surge occurs with the throttle closed.

Using turbo systems is a very efficient and effective way for manufacturers to produce engines that can meet the standards of both the consumer and government agencies. Since these systems are now electronically controlled, technicians must understand how turbo systems are designed and controlled to keep up with all the changes. 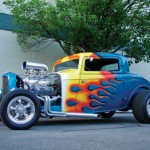 The Benefits of Forced Induction