The Benefits of Forced Induction

The ­displacement and efficiency of a naturally aspirated ­engine limit how ­much power it can make. The engine can only inhale so much air because the atmospheric force that’s pushing air into the engine is only 14.7 lbs. per square inch at sea level. To make matters worse, atmospheric pressure decreases with elevation. Air density also decreases with temperature because hot air is thinner than cold air.

Most stock naturally aspirated engines only achieve a peak volumetric efficiency ­of 75% to 85%.

• Modifying the stock heads or replacing them with aftermarket performance heads that have larger valves and better ports.

• Installing an intake manifold with taller and longer runners to help ram more air into the cylinders.

• Installing a larger throttle body or carburetor (or multiple carburetors) that can flow more CFM (cubic feet per minute).

• Improving exhaust scavenging with headers and crossover pipes that help improve air flow out of the cylinders.

With such improvements, it is possible to boost an engine’s volumetric efficiency into the 90% range or even higher. But achieving 100% or higher volumetric efficiency (especially at higher rpms) usually requires some type of forced ­induction system such as a turbocharger or ­supercharger.

A forced induction system overcomes the limitations of atmospheric pressure by pushing more air into the cylinders. Consequently, the engine’s power output becomes a function of how much boost it gets. What’s more, dialing up the boost pressure overcomes a lot of deficiencies in the induction system and cylinder heads that would otherwise limit air flow and the engine’s volumetric efficiency. 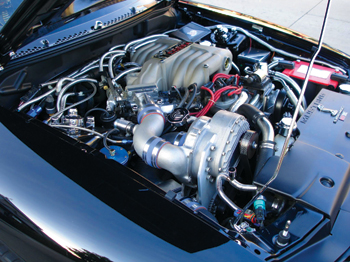 After all, it is much easier to push air into an engine with a turbo or blower than to suck it in with intake vacuum alone.

Even with a relatively moderate amount of boost, say 6 to 8 psi, a forced induction system can easily increase the power output of a typical street engine 150 or more horsepower.

Turn up the boost pressure to 14 to 16 psi and you can usually double the power output of most engines. Crank it up even more and you’re off to the races. The challenge then becomes building the engine so it can safely handle the extra power without breaking something (which we will get to shortly).

A turbocharger uses hot exhaust gases to spin a ­turbine wheel at high speeds that is connected by a short shaft to an impeller wheel inside the compressor housing. The impeller sucks air into the turbo housing, compresses it and pushes it into the engine to create boost pressure. As it is compressed, the air gets hot, so the air exiting the turbo is usually routed through an air-to-air or air-to-water heat exchanger called an “intercooler.” 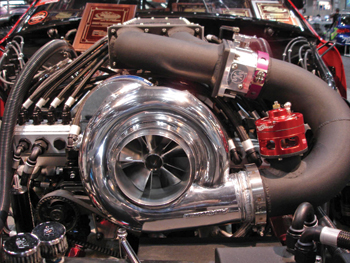 Boost pressure is controlled by a “waste gate” that opens to vent pressure once a certain level of boost has been achieved.

Turbo kits are available for many popular ­applications and greatly simplify installation issues by providing all of the hardware and plumbing that is needed to fit a particular vehicle, including higher flow fuel injectors, a higher flow fuel pump in some cases and a special tuner tool for recalibrating the ECM.

Supercharging, by comparison, typically provides more instant throttle response depending on the type of supercharger that is used. A supercharger is a belt-driven blower so it is somewhat less efficient than a turbo because it saps power from the engine to drive the blower. A turbo gets its drive energy for free from the exhaust but also creates a small amount of power-reducing backpressure that has to be overcome before it develops boost and starts to make power.

A “positive displacement” supercharger (also called a “Roots” style blower) — like that on the ZR1 Corvette, GT 500 Shelby Mustangs, Roush Mustangs and many street rods — has counter-rotating lobed rotors that force air into the engine. The boost pressure developed depends on engine speed and the underdrive ratio of the pulley on the supercharger.

By comparison, a “centrifugal” supercharger does not have counter-rotating rotors, but uses a compressor design similar to the impeller wheel on a turbocharger. Boost builds with rpm more like a turbo, but throttle response is better because of the belt-drive setup.

Supercharger kits are available for many popular street engines and typically offer a boost in performance of 150 to 200 or more horsepower — which most stock blocks can handle. But additional modifications become necessary to maintain engine reliability with higher levels of boost.

Turbocharger failures are often the result of poor lubrication or oil breakdown. The high temperature in the turbo exhaust housing transfers a lot of heat to the shaft bearings in the center housing. If the supply of coolant or oil to the turbo housing is restricted or lost, it can cause bearing failure. Synthetic oil is recommended for turbo engines because it can handle higher temperatures better than conventional oil. Regular oil changes are also a must.

Because turbochargers increase compression and power, they also increase heat and pressure inside the engine’s combustion chambers. This can make life difficult for the head gasket unless the gasket is capable of handling the extra boost.

Original equipment MLS head gaskets usually require an extremely smooth (30 RA or less) surface finish on both the cylinder head and engine block, but most aftermarket MLS gaskets have coatings that can accommodate surface finishes that are twice as rough (60 RA).

Whenever you’re customizing an engine for a customer that will employ some type of power adder, major upgrades or modifications will become necessary to safely handle the increase in power. What mods and how much will depend on the engine and the application. An engine that’s going into a drag car or some other type of race car may not rack up a lot of miles in a season but the miles it runs will be hard miles at full throttle under heavy load. Street engines, on the other hand, spend most of their time running under relatively light loads and only occasionally are called upon to produce maximum power. But they are expected to last tens of thousands of miles without any major problems. So it can be argued that engine durability is just as important for both types of power adder applications.

The upgrades that are necessary to handle power adders will depend on the engine and the power level the engine is built to produce. For a typical street application, changes to the stock pistons, rods and crankshaft are usually unnecessary unless a ­customer wants to make insane levels of power. Most stock block V8s can safely handle 150 to 200 extra horsepower on the street without encountering any major problems.

When an engine’s power output exceeds about 600 hp with a small block, or 800 hp with a big block, upgrades start to become mandatory with power adders. 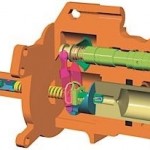 Hydro-boost brake boosters use the pressure of the power steering pump to power the brake booster. These systems can be mysterious to the untrained technician because part-swapping will not solve some brake issues. The booster is essentially a power steering unit that supplements the driver’s input. Hydro-boost was first introduced to solve issues associated with… 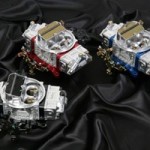 Adding an aftermarket performance intake manifold with taller, larger and/or longer runners feeds the engine more air and fuel to increase the torque and horsepower output. Adding on a larger carburetor, throttle body or multiple carburetors that can flow more cubic feet per minute (cfm) of air, or maybe boosting airflow with a turbocharger or…