Ignition coils have evolved many times in the past century. Whatever the ignition coil looks like, it always does the same function, creating a spark by converting amperage to voltage. How efficiently the ignition coil operates has changed dramatically as well. 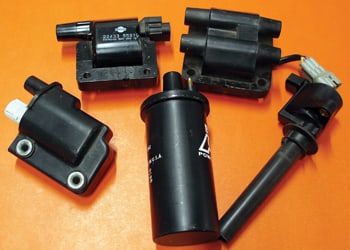 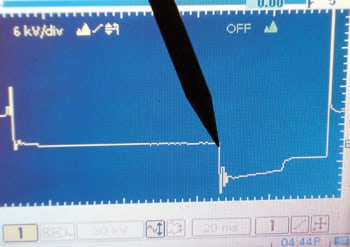 The PCM then commands the transistor to interrupt the primary circuit, collapsing the magnetic field, and creating an ignition spark. Some import models attach a transistor to the coil directly, but it is usually on a separate ignition control module. (ICM) Most systems also incorporate the transistor into the PMC. The core temperature is regulated by changing the on-time/duty cycle at high and low engine speeds.

Intermittent ignition coil failures are tough to diagnose because the windings are heat sensitive. 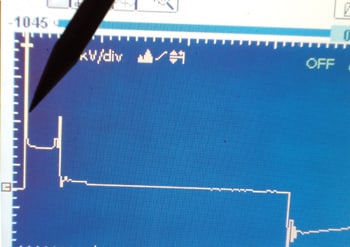 This can cause a coil to pass shop tests but fail under loads. Measuring a coil’s resistances can indicate whether it is defective or not. Another test is to see how well the spark jumps through the air, but there will only be a spark if there is 10v or more charged on the battery. Also, the air gap must be constant. Most technicians working on ignition coils use a computer based digital oscilloscope to measure the waveforms produced.

On modern COP ignitions, secondary waveform testing is almost impossible, so most technicians use a lab scope and a low amperage inductive current probe. 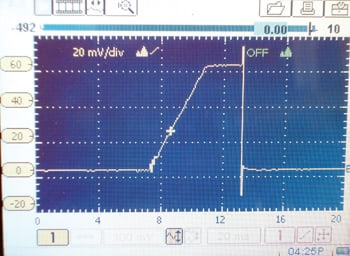 Depending on how the waveform looks, flat-topped or pointed, determines whether the circuits are limiting or non-limiting, respectively. 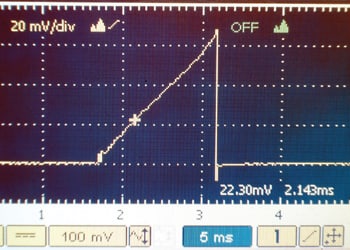 The primary circuit can be accessed through the ignition fuse in the fuse box.  In COP systems with no other access, a pair of jumper leads can be used to attach an inductive current probe.  If the coil driver in the PCM or the ICM is ruined, check the ignition coil for shorts.  If the coil is shorted, it could ruin the brand new PCM or ICM replaced, which could end up being a costly replacement. 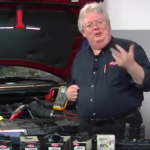 A detailed guide to diagnosing coil on plug misfires with a multi-meter.   Transcript: Okay time for some hands on, on the vehicle with coil-on-plug ’09 Ford Flex, which cylinder is actually misfiring. That’s why we had a podcast last year, that you can look up on the Delphi YouTube site and find all about… 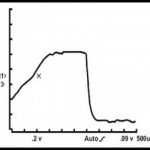 The role of the ignition coil is to multiply battery voltage into high voltage. Following Ohm’s law for the conversion of volts to amperes, oil-filled coils generally require 3 to 5 amperes of primary current to produce 20,000-30,000 volts of secondary current. Modern E-core and COP (coil-over-plug) ignitions require as much as 7 amperes of…