Hi, it’s Bill with MAHLE. Welcome to Chapter 5 in our ongoing series about all you ever wanted to know about piston rings.

Today we’re actually going to do a little segue and we’re going to segue from light-duty automotive, which we’ve talked about quite a bit, into the medium and heavy-duty diesel market. The light duty automotive, of course little engines like this Cruze that I’ve talked about before, have a 3-ring lineup. We’ve talked extensively about the two compression rings. We haven’t said much about the oil ring and it’s on the chevy cruze is true with virtually every light duty vehicle, gasoline’s vehicle at least, is the oil rings are what we call a three-piece design. You can see in the close-up here that we’re talking about two rails two flat rails and a waffle expander in the center. So three-piece design, light duty gasoline, almost a hundred percent out there of three-piece design. Reason is, it’s economical to manufacture and of course that’s important when you’re talking about light duty engines to keep the cost down at the OE level. Secondly, it is it’s very easy on the manufacturing side to vary the tension the amount of load that that ring puts out on the cylinder also as manufacturers change their thinking we can change it quite easily. Now let’s talk about the diesel pistons. And we’ve got a couple examples here. This is the cutaway that we showed you before and of course with the ring lands on here. This is a little smaller diesel all three piece designs as well. That means we’ve got a top ring a second ring and an oil ring, so three-piece design and the concept is the same. The top ring seals compression almost exclusively. Second ring, fine oil control. The oil ring, gross oil control.

Now let’s look at the differences and I might remind you going in when I’m talking diesel engines now I’m talking the engine so we expect to run from 500,000 to a million miles before they wear out so we tend to spend a little more on the ring pack because we’re expecting much longer life on these engines. Number one differences in the oil ring the oil ring. I showed you on the light duty was three-piece design this is what we call in the industry a two-piece design. It is either a piece of steel or a piece of cast iron that is formed in a one piece got slots in it and so on and then you’ll notice in the close-up here behind that we have a coiled spring expander and it’s actually that coil spring expander that puts the tension out on the cylinder wall for this ring to seal and scrape oil. It’s an excellent design but somewhat more expensive than the three-piece design hence it’s used primarily for these diesel engines where we have that ability to spend more money on the ring pack expect the engine to last longer. Now the other big difference in diesel engines is many of them even the pickup truck diesels and of course all the bigger ones most of all of them use a top compression ring is what we call a keystone design, and you can see in the little close-up here in the Keystone design, it gets its name from the fact that from the face of the ring to the backside of the ring both sides taper in and the ring gets smaller and it actually looks like a keystone. You remember Keystone’s or the Keystone State of Pennsylvania and their road signs and how they were manufactured? You know what I’m talking about. Well the reason for the Keystone design on the top compression ring of a diesel is it does a better job breaking carbon up that forms in the ring lands and again Diesel’s a fairly dirty fuel compared to gasoline carbon tends to build up long life’s involved there and if the ring should stick into that piston, stick into the groove that I’m talking about here and stop moving around, we have immediate failure. So the Keystone shape of that ring causes it to continue to break the carbon up as the ring expands and contracts and makes that piston and ring line up lasts a lot longer.

So there’s the difference between gasoline engines rectangular rings, diesel engines and their two-piece or ring, and their Keystone top ring.

Thanks for tuning in. 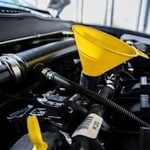