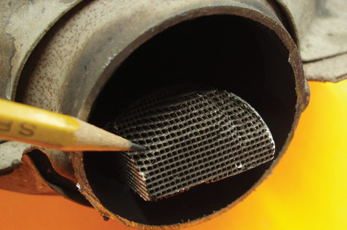 It’s important to have a basic understanding of how catalytic converters operate when servicing them. An internal combustion engine creates heat energy by igniting a mixture of gasoline and atmospheric oxygen with a high-voltage spark. Unfortunately, a residual quantity of hydrocarbons (HC), carbon monoxide (CO), and nitrogen oxides (NOX) are left over after combustion. Consequently, a catalytic converter uses precious metals like platinum as a catalyst to convert harmful pollutants like HC, CO and NOX into harmless gases like oxygen (O2), carbon dioxide (CO2) and water (H2O). Since a catalyst will accelerate a chemical reaction without being consumed by the process itself, the catalytic converter will theoretically last forever. In reality, catalytic converters eventually succumb to contaminants from coolant and engine oil additives and heat stress.

Converter types
“Direct-fit” catalytic converters are of three basic types: two-way, three-way and three-way plus oxidation converters. Two-way “oxidation” converters are used up to 1980 and are designed to eliminate hydrocarbons (HC) and carbon monoxide (CO). Three-way converters are designed to eliminate nitrogen oxides (NOX) as well. A Three-way plus or “dual-bed” converter allows atmospheric air to be injected between the three-way catalyst and an extra oxidation bed to further clean the engine exhaust. The precious metals used as catalysts are distributed in molecular form over a rough-surfaced ceramic wash coat covering the metallic honeycomb substrate. The effectiveness of the converter is basically determined by the amount of precious metals present on the honeycomb substrate. Consequently, it’s very important for supplier and technician alike to meet EPA requirements by selecting the correct catalytic converter for the application.

The Catalyst Monitor
Only after the engine is started and driven, does the catalyst monitor run. Basically, the engine control module (ECM) uses a mathematical algorithm to compare the electrical activity of the upstream oxygen sensor (before the converter) with that of the downstream oxygen sensor. When the electrical activity of the upstream and downstream oxygen sensors doesn’t meet programmed parameters, a diagnostic trouble code (DTC) P0420 and/or P0430 is stored in the ECM’s diagnostic memory and the orange “Check Engine” warning light is illuminated.

Because the catalyst monitor is mathematically-based, attempting to diagnose a converter by comparing inlet and outlet temperatures or by using an exhaust gas analyzer will not yield valid test results. When a P420/430 diagnostic trouble code (DTC) is present, the professional technician should check for related ECM calibration update bulletins before replacing a catalytic converter. In many cases, reprogramming the PCM might solve a stubborn P420/430 DTC issue.

Causes of Catalyst Failure
An ignition system misfire is the most common cause of catastrophic converter failure. The catalytic converter overheats because combustion takes place in the converter rather than the engine when a misfire occurs. When the converter exceeds an operating temperature of about 1,300 degrees F, the converter substrate begins to melt and cause exhaust restriction. Common failures also include a catalyst suffering from an external impact or being contaminated by coolant from leaking cylinder head gaskets. 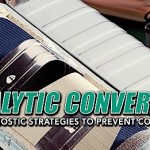 Catalytic converter efficiency codes can be a long diagnostic road that can either lead to a happy customer or an expensive comeback. 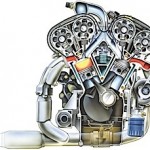 Engine ­management ­systems ­compensate for many things and last line of defense is the catalytic converter. Learn more about it from Know Your Parts.