LED (Light Emitting Diode) lights are the latest trend in automotive lighting. LED lights use an entirely different technology than conventional incandescent bulbs and headlamps to produce visible light. Conventional blubs produce light by passing current through a tungsten filament inside a sealed glass bulb to heat it up causing it to glow brightly and give off light. This generates a lot of waste heat and is not very efficient at producing light. To prevent the filament from burning up, the air inside the bulb is evacuated and replaced with an inert gas such as argon. With halogen bulbs, the gas also contain traces of iodine or bromine. This allows the filament to burn brighter and produce more light and whiter light. Traces of xenon may also be added to the gas, or the bulb may be tinted with a special coating to give the light a more bluish cast like that of HID (High Intensity Discharge) headlights.

The problem with conventional incandescent bulbs and halogen headlights is that they use too much current for the light they produce and they give off a lot of waste heat. The bulbs also have a limited lifespan, and the filament can break from vibration or being jolted.

HID headlights are about twice as efficient as halogen headlights so they use much less current. But they require a very high initial starting voltage, which requires adding a special ballast and control electronics to the headlight circuitry. HID headlights use an electrical arc passing through a gas inside a high-temperature bulb to generate light rather than a filament. Because there is no filament to break or burn out, HID headlamps typically last 2-5 times longer than ordinary headlamps, but are expensive to replace.

LED lights are solid state diodes. They have no bulb or filament and contain no gasses. When current flows through the diode, it excites the material and generates light. LEDs are 4 times more efficient than standard bulbs at converting current to light, while producing much less heat. LEDs are also extremely long-lived. But until recently, their light output has not been great enough for use in headlights. 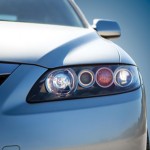 As a vehicle ages, tail lamps and headlamp replacement is inevitable. These tips can help make this repair easy and avoid unwanted comebacks. 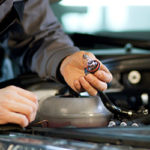 The Philips Lighting Safety Campaign, launched by Lumileds, is a public service aimed at encouraging service technicians to change headlight bulbs in pairs, whenever they need to replace a bulb due to damage, failure, or when one of the bulbs starts to dim.