Effect of Corrosion on ABS Sensors

Transcript:
Imagine you’re pulling your truck into your garage. You step on the brake, and you just keep rolling. That’s the kind of problem experienced by owners of these ’99 to 2002 Chevy trucks, and it’s due to a problem in the ABS sensors. The sensor reads the wheel speed from the tone ring in the bearing. The gap between the sensor and the ring is critical. The problem is that corrosion around the bearing assembly can lift the sensor away from the tone ring. That changes the gap and confuses the ABS system because it’s getting inconsistent data about wheel speed. Because of the way the ABS systems in these vehicles were programmed, it’s only an issue in speeds below 10 miles per hour. At those speeds, the faulty sensor output can cause the brakes to fade. That’s why vehicle owners were bumping into garages, posts, and curbs.

The fix is pretty easy. Remove the ABS sensors from the bearing assembly by removing the six-millimeter hex bolt. Then, work the sensor out of the bearing. Be gentle; it’s a plastic head. Plug the sensor hole to keep dirt from getting into the bearing. A foam earplug works great. Gently clean the surface of the ABS sensor with a wire brush or a file. Don’t grind away too much, though, because you’ll change the gap and create a new problem. All you’re doing is changing the sensor to tone wheel gap back to the factory specifications. Don’t forget to remove the foam earplug.

Then, apply an anti-corrosive lubricant to the sensor pad. Re-install the sensor and secure it with the six-millimeter bolt. That should fix the problem and avoid ABS brake issues. I’m Rick Domin, and this has been a Timken Tricks of the Trade video helping you build your service knowledge. Visit timken.com/aftermarket for more information, and thanks for watching. 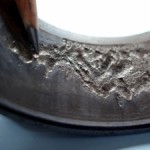 A damaged wheel bearing can cause many issues with your cars breaks. These tips will help you identify worn wheel bearings and how to properly service them.