The Diesel Particulate Filter (DPF) is a ceramic filter that has thousands of tiny channels or honeycomb-shaped openings that trap the soot onto the channel walls and prevent the particulate matter (down to 1 micron) from exiting out the tail pipe. The honeycombed inner structure is covered with a layer of a chemical catalyst that contains small amounts of precious metals, usually platinum or palladium.

Diesel cars and trucks manufactured after 2009 must have a DPF, and in some cases, a Selective Catalysts Reduction (SCR) system. These components work together to reduce, and when working properly, remove all of the harmful NOx and soot from the exhaust. Not only does this help the environment, it also creates a much cleaner engine. Engine oil doesn’t get as dirty as fast as it would have without all of these systems in working order. Less soot mixed with the engine oil means less of that gritty carbon forming in the oil galleys and other moving parts. This increases the life of the engine at the same time it cleans the air.

The drawback to all of this is that the DPF needs to be cleaned regularly. The soot particles attach themselves to the lining of the DPF while the engine is running. At the same time, the filter is slowly clogging with the very particulates that it’s designed to remove from the exhaust. This process of cleaning the DPF is done through a process called regeneration. There are several different methods used by various manufacturers to clean the DPF.

Active self-regeneration occurs when there is not sufficient heat in the exhaust to convert the PM being collected in the DPF. The active regeneration is self-activated by the PCM based on various inputs. The PCM sends a command to raise the exhaust temperatures by adding a small amount of injected raw fuel upstream of the DPF. The chemical reaction of the precious metals in the DPF and the raised exhaust gas temperatures oxidizes the PM from the filter.

Some diesel exhaust filter failures are a result of not allowing the regeneration to take place. This will inadvertently clog the DPF to the point that replacement is the only option. Although it can be cleaned to some degree, a portion of functionality is still lost due to the severity of the restriction. Another problem is when it is in regeneration and the excess heat combined with the clog causes the metal casing of the DPF to expand and rupture. Which, of course, means the only solution is to replace the DPF. The DPF requires professional cleaning every 150,000–250,000 miles or 5000 hours.

On some vehicles, the monitoring is done by way of a pressure sensor that measures the input and output pressures of the DPF. Others use mileage or an engine hour counter. On most vehicles, there is a way to shut off the regeneration process if you are in a situation where raising the exhaust system’s temperature could cause a fire. But, don’t leave it off or permanent damage can be caused to the DPF.

Regeneration can only happen when the conditions are within the preset specifications for that motor and manufacturer’s needs. In general, most regeneration cycles are handled without the driver knowing they are taking place. The regeneration process occurs by raising the temperature of the DPF to around 1,100°F (600°C) and enough oxygen is provided directly to the DPF. Some systems will inject extra fuel into the cylinder on the exhaust stroke which effectively sends hot gasses into the oxidation catalyst of the DPF, raising its temperature sufficiently to cause the carbon to react with the excess oxygen that was also provided. Other systems rely on a heating element just in front of the DPF to raise the temperature.

The regeneration process will continue until the pressure differential across the DPF (input and output) drops to an acceptable level. Should the driving circumstances change, for instance, the car comes to a halt and the regeneration is abandoned until the conditions once again become suitable. Regeneration can be a noisy affair, as the engine revs up to 4,000 RPM for four minutes or more, then goes to 2,000 RPM for an additional four minutes or more. When the regeneration has completed, the vehicle will return to its normal idle, and the service light will go back off.

Problems arise when successive regenerations are abandoned, and the soot levels build to a point where the DPF clogs and can’t be regenerated on its own. Short trips and stop-and-go traffic might not allow the DPF to get up to temperature. When this happens, the driver is notified by a flashing DPF warning light. If the warning light is ignored, then a second warning appears which can cause the vehicle to go into limp mode. In limp mode, the vehicle will not operate over 5 or 10 mph and will remain that way until it has been properly serviced using a scanner to perform the regeneration process.

SCR is an alternative to the EGR and addresses the same issue of reducing the NOx contaminants. This system uses a solution of 32.5% urea and 62.5% denatured water called Diesel Exhaust Fluid (DEF). This blue fluid is contained in a separate holding tank that is injected into the exhaust. When the urea mixture meets the hot exhaust gasses, it decomposes to ammonia (NH3) and CO2. The ammonia then reacts with oxides of nitrogen in a second catalytic converter to form a harmless output of nitrogen and water. The advantage is not only a reduction in NOx, but a reduction in the use of the EGR. This means a more efficient combustion, a reduced PM output and improved fuel consumption. 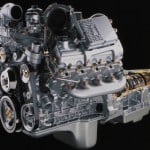 The 6.0L Power Stroke Diesel engine has earned a reputation for being unreliable. With a few aftermarket adjustments, this reputation can be lost. 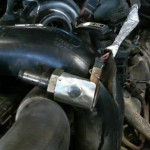