The Importance of Premium Hardware

When I first opened my auto repair business many years ago, I had a good friend and customer who owned a 1970 Ford Bronco. Since money was no object when it came to repairs or maintenance, I used only premium-grade replacement parts. So, I ordered the “best” quality hardware when the original front brake shoes needed replacement. 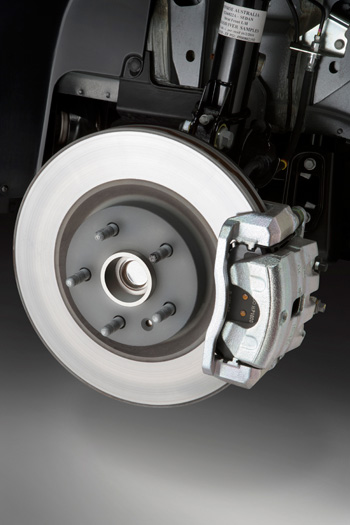 Upon replacing the linings, the pedal effort increased greatly during the initial test drive. After seating and readjusting the brakes, I attempted a panic stop. The Ford Bronco barely slowed, let alone make the tires squeal. While these brake shoes might have passed muster on a Bronco equipped with power brakes, their performance was completely unacceptable on a Bronco equipped with manual brakes. In any case, I had to re-do the brake job out of my own pocket to make the Ford Bronco stop as it should.

Although the above story is technically dated, it vividly illustrates that not all brake friction is created equal. Whether drum or disc, attempting to cut costs by installing brake friction that doesn’t meet original equipment (OE) requirements generally produces less-than-desired results.

Most premium brake pads are ceramic formulations because they provide the greatest stopping power and longevity while producing a minimum level of noise and dust for the average passenger car application. Ceramic brake pads generally use copper fibers to bond the brake friction compound together.

The non-asbestos organic (NAO) or “good” brake lining was created to replace asbestos-based brake friction. While in many brake friction lines, NAO is considered a “good” rather than “better” or “best” lining, NAO is also used in many Original Equipment (OE) applications because it generally provides smoother application and more even side-to-side braking than do other formulations.

In passing, I’ll mention that the “edge codes” printed on the side of new brake lining generally indicate the lining’s cold and hot performance characteristics. Since edge codes are a general, rather than specific, indicator of overall brake friction performance, I’ll just say that a more detailed discussion of edge codes can be found by typing “brake edge codes” into your Internet search engine.

Since auto manufacturers spend a tremendous amount of time and money to make their brakes operate as efficiently as possible, it’s important to follow a few rules for selling brake friction. For example, it’s important to never sell half-sets or transfer brake friction from one carton to another. Mixing pads or shoes creates an automatic warranty situation if the friction coefficient of individual linings differs enough to cause a brake pull complaint.

Similarly, it’s important to sell only the OE-equivalent linings front and rear, especially on front-wheel drive vehicles. On older FWD vehicles without anti-lock braking systems, many auto manufacturers actually reduce the potential for rear-wheel brake lock-up on slick roads or during panic stops by reducing the coefficient of friction in the brake lining compound. Similarly, mixing linings with different friction coefficients on rear wheel-drive (RWD) vehicles might also cause premature ABS activation or a rear wheel lock-up complaint on slick roads or graveled road surfaces.

It’s also important to make sure that the design of the replacement brake rotor meets OE specifications. An economy brake rotor will often increase brake noise because it uses a non-OE specification cast iron and it might tend to run hotter because it has less cooling fins and because those fins might not be shaped to provide maximum air circulation. In contrast, a premium rotor will appear and perform identically to the OE version.

Harsh brake grinding and squealing noises usually occur because the brake pad vibrates against the brake rotor as the brakes are applied. To minimize pad vibration, it’s important to replace the original equipment-style brake shims and locating grommets. Most premium brake pads are manufactured with the shims attached and, if required, include new grommets and brake caliper lubricant. Many economy pads require that those parts be purchased separately or reused.

Last and most important, all brake friction must be clean when installed. Greasy handprints on brake friction can be avoided by using shop rags to keep the hands clean. Any residual contamination should be removed with brake and parts cleaner. When inspecting brake friction, it’s also important to replace sticking calipers, leaking wheel cylinders, and seeping axle oil seals. In most cases, it’s far more cost-effective to routinely replace these components than to wait for them to fail at a future date. 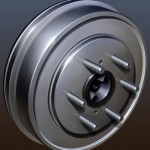