Contamination always has negative connotations. And, for brake pads, it has dual meanings. First, it can mean a contaminated friction surface that alters friction levels and 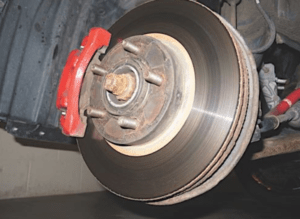 performance. Second, it can mean contamination to the environment from brake dust.

In this article, we will attempt to explain both types because both forms of contamination can occur once a brake pad is pressed into a rotor and friction is generated.

Some friction materials have a different material on the bottom layer of the pad.

Friction is the force resisting the relative motion of elements sliding against each other. In the case of cars and trucks, it is the brake pads pushing against a rotor that changes kinetic energy into heat.

If you could mount a microscope on a brake pad, you would see bits and pieces of the pad and rotor breaking away from their surfaces during braking. As this is happening, the heat is physically and chemically changing the exposed friction material, and bits and pieces are being torn or sheared from the rotor and pad.

Some particles become embedded to the friction surface of the rotor, while others are cast off to stick to wheels and other vehicle components. The latter particles can then be washed off onto the road where they can contaminate rivers and streams during runoff.

The bottom line is that for the brakes to function, the rotors and pads have to wear. Even a brake rotor’s metallurgy can determine how a pad wears.

The Secret Sauce of Friction

How the components in the friction material shear, break and interact during braking can determine a pad’s friction level, noise and wear characteristics.

A brake pad may require up to 20 different raw materials. Some raw components are abrasive, while other components lubricate. 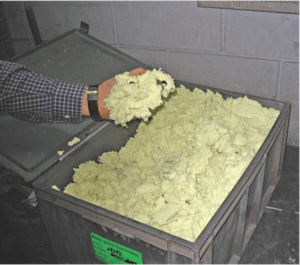 Some components, like structural fibers and resins, hold the pad together, while other components tune the friction levels through various temperature ranges.

Tuning the components in a brake pad mix is like tuning a graphic equalizer on a stereo for the best sound. This is the “art” of friction material formulation and why some pad manufacturers protect their recipes like they’re KFC’s seven secret herbs and spices.

A friction material has may different components. Kevlar fibers, for example, help to give the brake pad structure under high temperatures.

So, friction is just plain friction, right? Wrong. There are two types of friction when it comes to brakes.

Abrasive friction is the wearing of the pad and rotor to change forward motion into heat. This type of friction involves the breaking of bonds of both the pad material and the disc’s cast iron when the caliper pushes them together; however, both components experience wear. Semi-met pads and some non-asbestos organics (NAO) use this type of friction.

Adherent (or adhesive) pad material forms a very thin transfer layer of pad material on the surface of the rotor. The two surfaces are the same materials and generate friction by breaking or shearing the bonds in the pad.

Ceramic and some NAO pads use this type of friction. The transfer layer is bonded to the rotor’s surface and cannot be washed away by water or wheel cleaners. The only way to remove it is with a brake lathe or abnormal heat.

The layer is always being worn and replenished by the brake pad during braking, so these pads produce dust. And, while adherent friction is easier on rotors, the pads become the primary wear component.

With this type of pad, it is critical to machine the rotor with the correct surface finish and follow the recommended break-in procedure so the transfer layer can be established.

With both types of friction, it is critical for the rotor to have minimal runout. 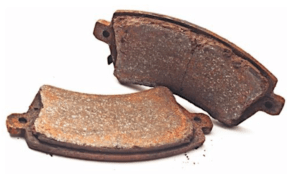 Why do some pads use components that could be considered harmful to the environment? Part of the answer is that some materials’ effects on the environment were not fully realized until a few decades ago.

Copper is used in brake pads as an abrasive, but two states have legislation limiting its overall content in brake pad formulations. The main focus of new laws in Washington state and California revolves around protecting the environment. Much of the dust that is emitted into the air is blown onto areas next to the road, or is washed into the storm drains when it rains. Most storm drains flow directly into creeks, rivers and marine waters without wastewater treatment. Copper and other harmful materials can hurt and kill small marine animals and even render some fish without a sense of smell.

Besides copper, asbestos is another braking material of which techs should be cognizant. This naturally occurring fiber is a great structural component that resists heat. However, in the 1970s, scientists found that the dust caused cancer and asbestosis in technicians. Friction material companies stopped using asbestos because it put their customers and employees at risk.

Some components are not harmful during manufacturing, but during the heat of braking, they can change and even combine with other elements and oxidize.

How Harmful is This Stuff?

There is no need to purchase a hazmat suit to work on brakes. As long as you use common sense practices, such as using a liquid brake cleaner as opposed to compressed air, you should be safe. Always check the MSDS sheets for all products used in your shop; this includes brake pads. 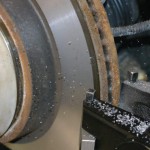 Just like a diagnostic flow chart, you can assess a brake NVH and the braking components to find a resolution which can be productive and profitable. 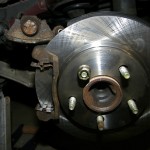